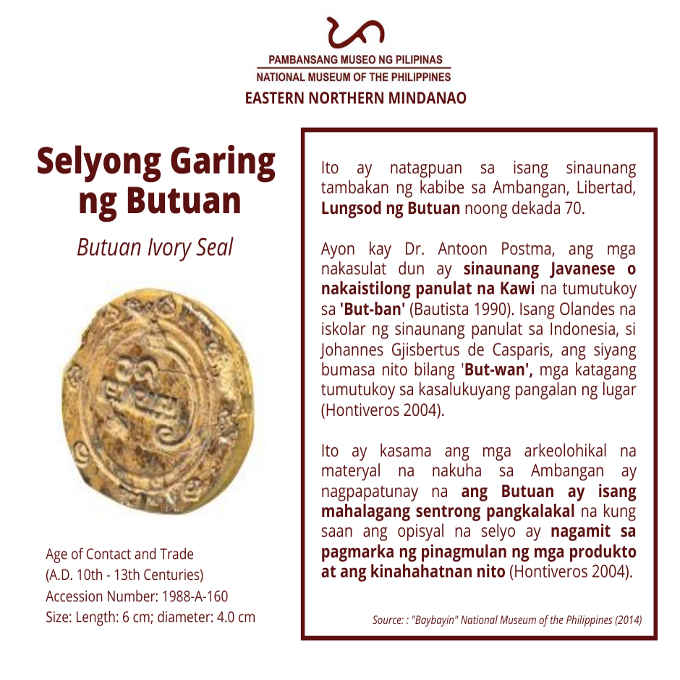 This was recovered in a prehistoric shell midden site dated back from the 10th to 13th centuries A.D. by pothunters in Ambangan, Libertad, Butuan City in the 1970s.

According to Dr. Antoon Postma, the inscription is an ancient Javanese or stylized Kawi script referring to “But-ban” (Bautista 1990). A Dutch scholar in ancient Indonesian scripts, Johannes Gijsbertus de Casparis, decoded it as “But-wan”. These words refer to Butuan, the present name of the area (Hontiveros 2004).

The ivory seal, as well as the priceless archaeological materials recovered in Ambangan archaeological sites, corroborate Butuan as an important trading center whose official seal marked the source of commodities it produced and exported (Hontiveros 2004).

This artifact is currently displayed in the Baybayin Gallery at the National Museum of Anthropology in Manila which is STILL CLOSED for public viewing due to the ongoing COVID-19 pandemic. Nonetheless, you may visit us at the museum thru Museum From Home programs to keep on learning about Philippine heritage.

Source: fb/nmenmindanao via “Baybayin” National Museum of the Philippines (2014)