Josephine Dela Vina was included in the third batch of enshrinees in
the Philippine Sports Hall of Fame in Athletics.

Josephine Dela Vina said, that everytime she win in an international meet,
tears would fill her eyes when the Philippine tri-color was hoisted and the
band played the national anthem. Although her father is Mexican, she believe
she should remain a Filipino. She is proud to be one. 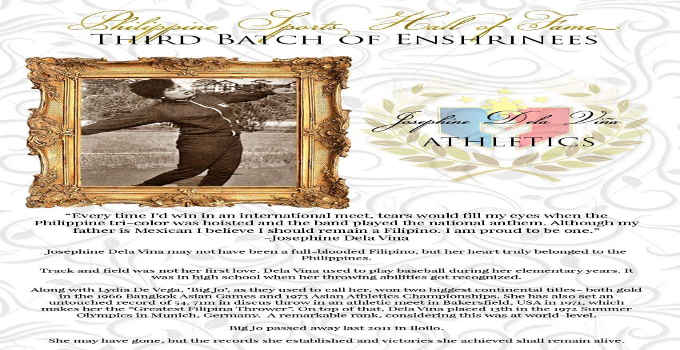 Josephine Dela Vina may not have been a full-blooded Filipino, but her heart truly belonged to the Philippines.

Track and Field was not her first love. Dela Vina used to play baseball during her elementary years. It was in high school when her throwing abilities got recognized.

Along with Lydia De Vega, Big Jo, as they used to call her, won two biggest continental titles, both gold in the 1966 Bangkok Asian Games and the 1973 Asian Athletics Championship.

She has also set an untouched record of 54.71m in discus throw in an athletic meet in Bakersfield, USA in 1971, which makes her the “Greatest Filipina Thrower”.

On top of that, She placed 13th in the 1972 summer Olympics in Munich, Germany. A remarkable rank, considering this was at the world level.

She may have gone, but the records she established and victories she achieved shall remain alive.