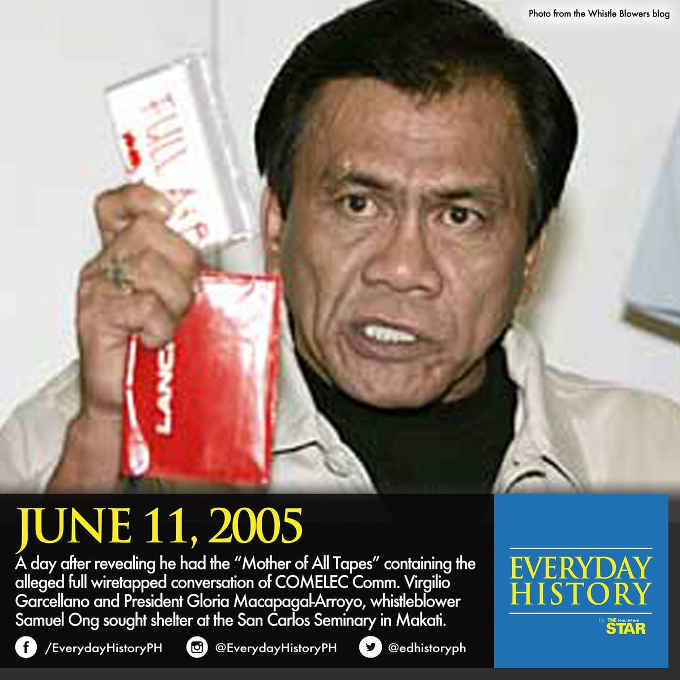 The day before he revealed he had the “Mother of All Tapes” containing the alleged full wiretapped conversation of Election Commissioner Virgilio Garcellano and Philippine President Gloria Macapagal-Arroyo discussing alleged cheating in the 2004 Presidential Election.

His supporters and sympathizers gathered outside the seminary to safeguard him after he received threats to his life due to his revelations.

On June 11, 1987, the Philippines established diplomatic relations with Albania.

Today, June 11, 1019, we celebrate 32 years of the establishment of formal diplomatic relations between the Philippines and Albania.

The Philippines has an Honorary Consulate in Tirana.

On this day, Presidential Decree No. 1405 converted the Budget Commission into the Ministry of the Budget and gave it’s head the rank and status of a Minister and member of the Cabinet. Under the parliamentary form of government, the Minister of the Budget automatically chaired the Committee on Appropriations and Reorganization in the Batasang Pambansa.

On June 11, 1925, Emilio Aguinaldo wrote a letter to Captain Emmanuel A. Baja his desire for the unique feature of the Philippine flag which was the flag with the red field on top, which denote a state of war.