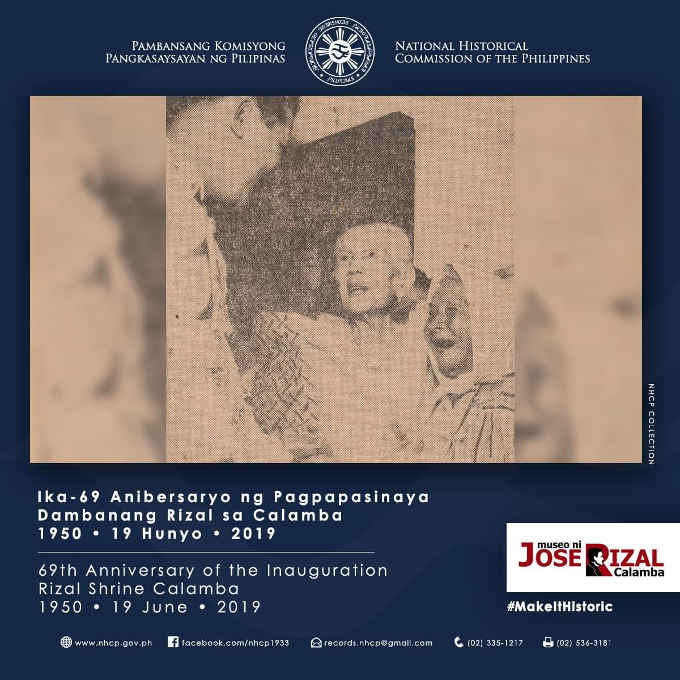 On this day, June 19, aside from celebrating the 158th birth anniversary of Dr.Jose Rizal,  is the 69th anniversary of the inauguration of the re-built Rizal home in Calamba. Known today as the Rizal Shrine Calamba (Museo ni Jose Rizal Calamba).

The picture above shows the meeting on inauguration day among, Jose Rizal’s sister, Trinidad Rizal, the then, Calamba Mayor Sisenando V. Rizal, and the Rizal’s cook, Aling Vale. The picture above was taken from one of the collections of Diosdado Capino.

A copy of this photo published in Capino’s book “Childhood and Boyhood Stories of Jose Rizal” (1957) was first shared on Facebook by the writer, food historian, and herald’s advocate Felice Prudente Sta. Maria.

On this day, June 19, in 1861, Filipino nationalist, reformist, doctor, and polymath  Dr.Jose Rizal was born in Calamba, Laguna to Francisco Mercado and Teodora Alonzo. He was the seventh of 11 children in the family.

His novels Noli Me Tangere and El Filibusterismo helped ignite nationalistic sentiments among Filipinos, leading to the 1896 Philippine Revolution. @edhistoryph

On this day, June 19, in 1944, the Battle of the Philippine Sea, the largest carrier-to-carrier battle in history, began. During the battle, the US Navy Fifth Fleet, led by Adm. Raymond Spruance, faced the Imperial Japanese Navy First Mobile Fleet, led by Adm. Jisaburo Ozawa.

The aerial phase of the battle was known as the Great Marianas Turkey Shoot because of the significant losses the US inflicted on Japan’s carrier air strength. It was the last of the major carrier-to-carrier engagements between American and Japanese naval forces in World War II. @edhistoryph