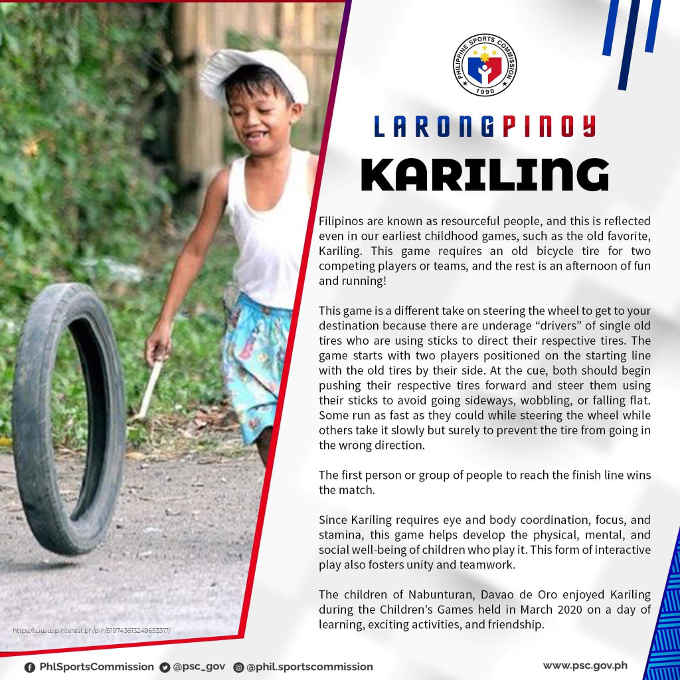 Filipinos are known as resourceful people, and this is reflected even in our earliest childhood games, such as the old favorite, Kariling.

Filipinos are known as resourceful people, and this is reflected even in our earliest childhood games, such as the old favorite Kariling.

This game requires an old bicycle tire for two competing players or teams, and the rest is an afternoon of fun and running!

This game is a different take on steering the wheel to get to your destination because there are underage “drivers” of single old tires who are using sticks to direct their respective tires.

The game starts with two players positioned on the starting line with the old tires by their side. At the cue, both should begin pushing their respective tires forward and steer them using their sticks to avoid going sideways, wobbling, or falling flat. Some run as fast as they could while steering the wheel while others take it slowly but surely to prevent the tire from going in the wrong direction.

The first person or group of people to reach the finish line wins the match.

Since Kariling requires eye and body coordination, focus, and stamina, this game helps develop the physical, mental, and social well-being of children who play it. This form of interactive play also fosters unity and teamwork.

The children of Nabuntuan, Davao de Oro enjoyed Kariling during the Children’s Games held in March 2020 on a day of learning, exciting activities, and friendship.