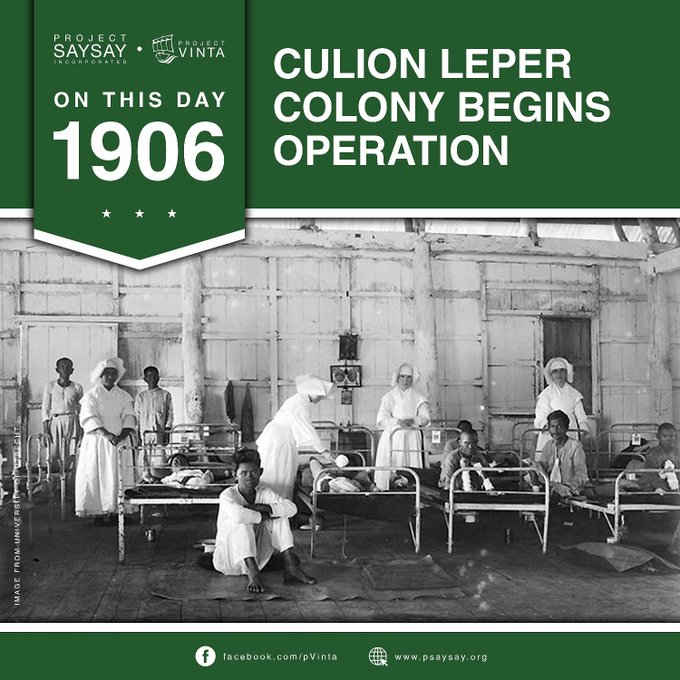 On this day, May 27, in 1906, the Culion Leper Colony began its operations. This was upon the arrival in Culion of 365 leper-stricken people from Cebu, facilitated by the United States Coast Guard.

Leprosy was already in the Philippines when the Spaniards arrived. In 1633, some Japanese Christians banished from their homeland for embracing Christianity had leprosy. This prompted the Spanish authorities to open San Lazaro Hospital in Manila to leper patients.

When the Americans came, they intensified the campaign to isolate lepers from the rest of the population on an island. Assisting the authorities in Culion was the Jesuits and the Sisters of St. Paul of Chartres.

As the leper colony increased in population, the U.S. Insular Government of the Philippines raised the quality of life in the colony. Water and sewerage systems, school, town hall, theater, and settlement houses were put up.

A municipal government under the health authorities was organized, complete with its own police force, currency system, and civil courts. It was even hailed as one of the model leper colonies in the world.

Through time, the regionalization of leprosy treatment contributed to the decline of the colony’s population. In 1965, the Liberalization Act was passed that prohibited the admission of early active cases of leprosy in Culion.

In 1974, the colony was reverted as a reservation under the Department of Health and became a municipality in 1999. In 2005, the colony was declared leprosy-free. (@ProjectSaysay)