Through the directive of the commissioner of customs to alert all incoming shipment of consignees with smuggling record, another shipment of ASD Total Package Enterprises Inc. suspected to contain misdeclared agricultural products was intercepted at the Manila International Container Port. 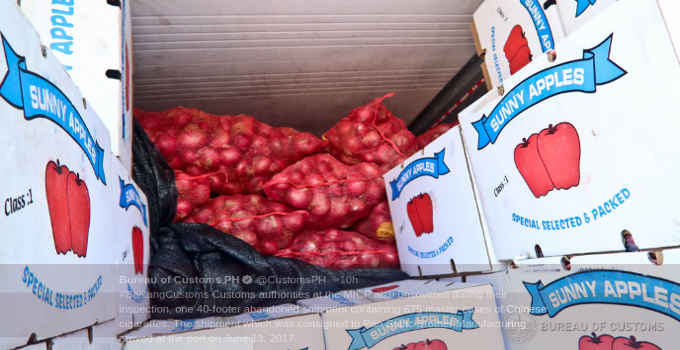 The eight suspected containers arrived at the Manila International Container Port
(MICP) on August 14, 2018, was declared to contain 20,000 cartons of fresh apple but was later found to contain bags of red onions covered by boxes of apples estimated to be worth P16 million.

The consignee and the customs broker will face criminal raps for violating section
1400 in relation to section 1113 of the customs modernization and tariff act, and
Republic Act No.10845, also known as the Anti-Agricultural Smuggling Act of 2016.

Customs authorities at the MICP also uncovered during their inspection, one
40-footer abandoned shipment containing 675 master cases of Chinese cigarettes.
The shipment which was consigned to Pan Subic Brother Manufacturing arrived at the port on June 13, 2017.