Home  »  Lifestyle   »   Who is the Father of Philippine Anthropology? 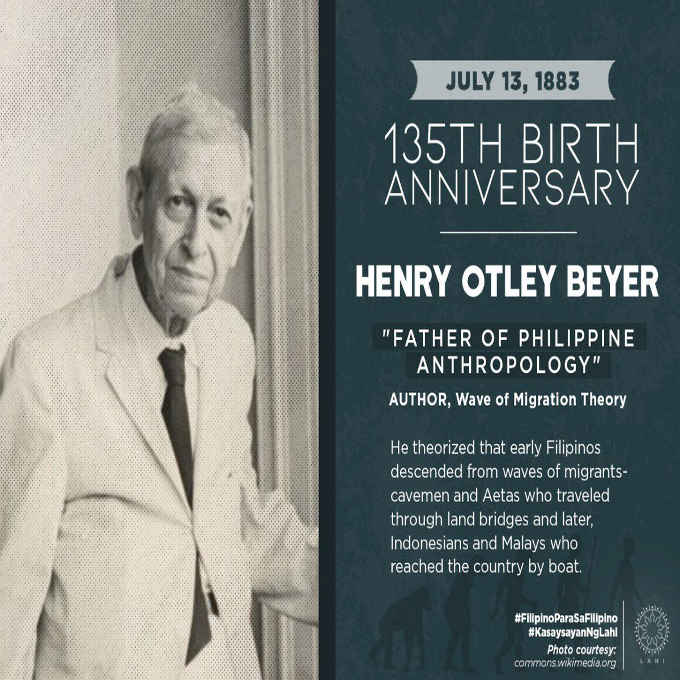 Henry Otley Beyer is the father of Philippine Anthropology. He was born on July 13, 1883 and passed away on December 31, 1966. He was an American anthropologist, who spent most of his adult life in the Philippines teaching Philippine indigenous culture.(wikipedia)

Henry Beyer authored the “Wave of Migration Theory. He theorized that early Filipinos descended from waves of migrants-cavemen and aetas who traveled through land bridges and later, Indonesians and Malays who reached the country by boat.

Beyer’s contributions to Philippine anthropology are vast and varied. He founded the Department of Anthropology of the University of the Philippines in 1914, initiated significant researches in many major fields of anthropology, and published a number of books and papers in Philippine and foreign journals.(wiley)

Beyer was born in Edgewood, Iowa, on July 13, 1883. He received his B.A. and M.A. degrees from the University of Denver,Colorado and later pursued further graduate studies at Harvard University as a Winthrop scholar. His interest in the Philippines was first kindled after witnessing the fifty-acre Philippine exhibition at the Saint Louis Exposition of 1904. To fulfill his dream of going to the Philippines, he took a job with the Ethnological Survey Office, Philippine Civil Service, in July 1905.

Beyer was honored by several Philippine institutions. He was awarded honorary doctorates by Silliman, Ateneo de Manila, and the University of the Philippines.

One of Beyer’s most distinguished Filipino students is Dr. Carlos P. Romulo, a former Philippine Secretary of Foreign Affairs, who in 1949 was elected the first Asian President of the United Nations General Assembly.