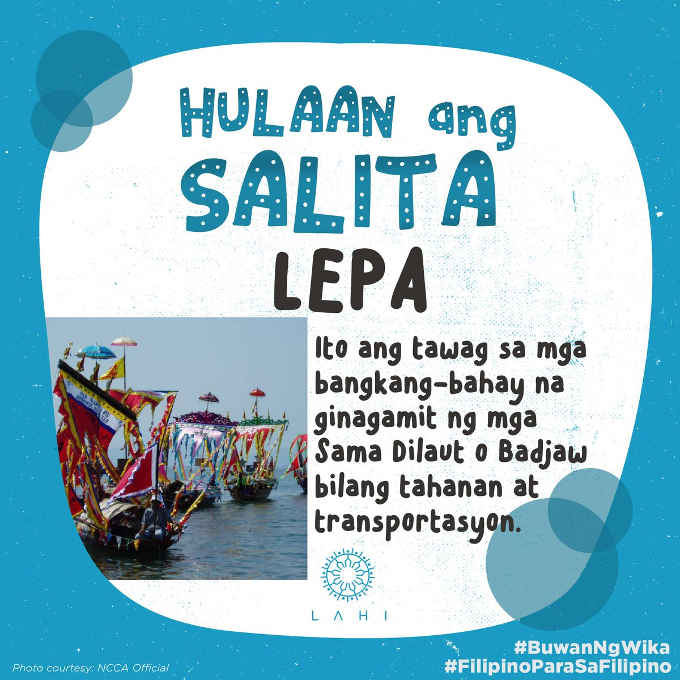 Lepa is the lined boats you see on the shoreside beach of Tawi-Tawi.

Lepa is the house boat used by the Sama Dilaut or Badjaw which serves as their house and mode of transportation.

The Sama Dilaut (more often known as the Bajau or Bajau Laut) is one of the ethnic groups of Southeast Asia known as the ‘Sea Gypsies’.

Linguistically, they are a subset of the Sama ethnic group of the Southern Philippines,  most of which are settled and heavily Islamised.

Historically, the Sama Dilaut (‘Sama of the Sea’) have been distinguishable from other  Sama on the basis of their maritime mode of life and a lesser degree of Islamization.

Today, virtually all Sama Dilaut are mainstream Muslims, and most are settled.

However, the Sama Dilaut of the Tawi-Tawi islands maintained their traditional religion and lifestyle until the 1970s. Re: Ethonyms applied to this group: “From the time the  Sama Dilaut first appeared into the literature, confusion has reigned regarding their name.

Their autonym is ‘Sama’ and if they need to distinguish themselves from the shore-dwelling  Sama people, they call themselves ‘Sama Dilaut’ (‘Sama of the Sea’).

In eastern Borneo, other people call all Sama people ‘Bajau’ and the Sama Dilaut are called ‘Bajau Laut’ (“Bajau of the sea”).

‘Bajau’ is apparently an Indonesian name for boat-dwelling people who were transferred to the Sama people in Borneo, both land-dwelling and boat-dwelling.

In the Sulu Archipelago, ‘Bajau’ is commonly used by outsiders for the Sama Dilaut, but not for other Sama people. The earliest visitors to Sulu referred to the Sama Dilaut  as ‘Bajau’ and that name became established in the ethnographic literature for the  full-time and part-time boat-dwelling Samal of Sulu.(puloto)