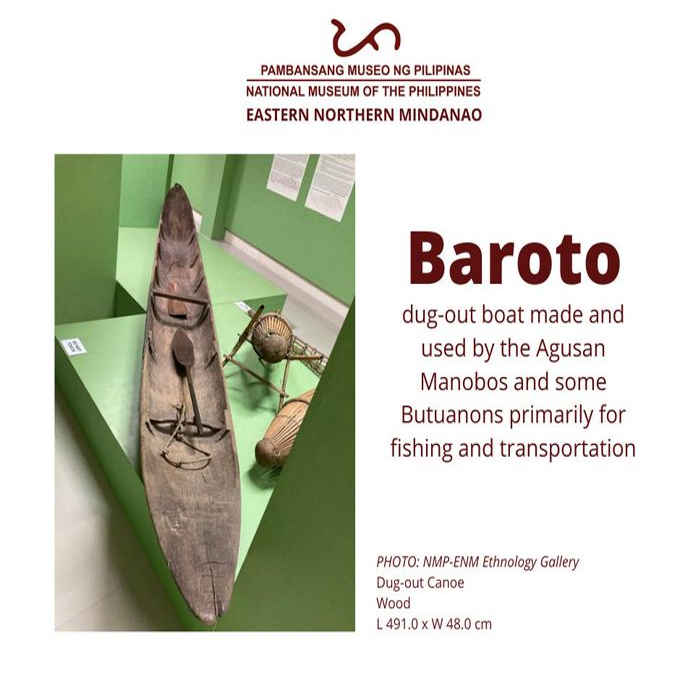 Baroto is a dug-out boat made and used by the Agusan Manobos and some Butuanons primarily for fishing and transportation.

How to make a Baroto? Here’s how the Agusan Manobos do it…

First, they choose the timber to be used and they offer a prayer addressing the spirits that took care of it. Trees suitable for making a baroto are “lauan” (Anisoptera thurifera Blune or Diptoocarpus thurifera-Bl.), “lauan mulato” (red lauan, Shorea contorta), “lauan blanco” (Shorea negronensis), “tagkan” (Palaquiium pinnatinervium), and “hindang” (Myrica sp.). Wood or timber is classified according to its hardness, color, and even taste. Manobo “magbayutuhay” prefer spicy-tasting wood and usually measures approximately 50 dupa.

Once the tree is cut, the timber is then transported to the construction site near the river. Then it will be stripped off its bark. A rope is then tied at the middle part of the timber to anchor it and to prevent movement while carving. The rope also serves as measure for the top layer that will be dug out. Tools used for hollowing and carving the middle part are the “atsa” (gouge), “dadag”, and “bingkung”.

Due to the long process and the accompanying rituals, the Manobo only makes a baroto whenever the need arises, or whenever commissioned by other groups from nearby places. Today, however, baroto-making is not only restricted to the Manobo group as other people from nearby places now also specialize in baroto-making. Other socio-cultural, environmental, and economic changes have placed the baroto in uncertain circumstances. Thus, related rituals, beliefs, and practices along with its relevance in present Butuan culture and society are increasingly being challenged.