Home  »  Government   »   How is a proper flag ceremony (Philippines) conducted?

How is a proper flag ceremony conducted? Here are some parameters in accordance w/ the law.

On how to raise the flag on its pole.

Section 22. The National Flag shall be hoisted to the top briskly and lowered ceremoniously. 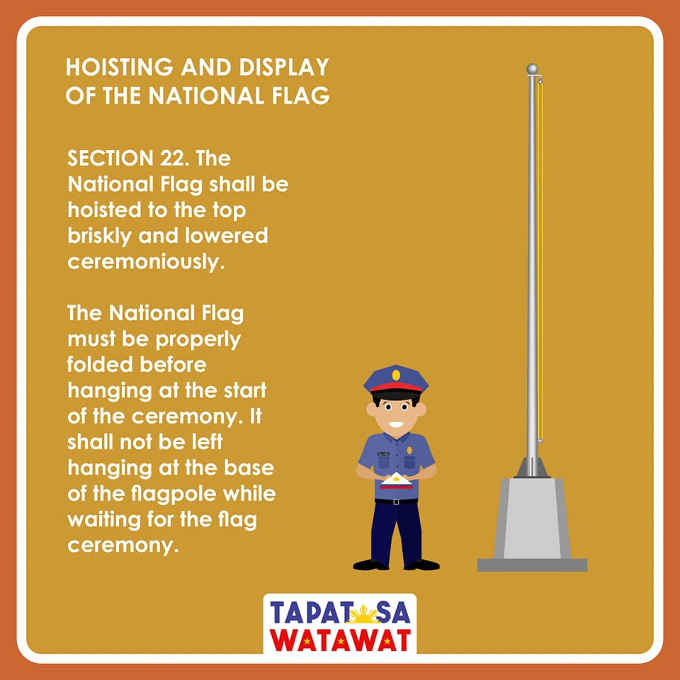 The National Flag shall never touch anything beneath it, such as the base of the pole, ground, or other objects. 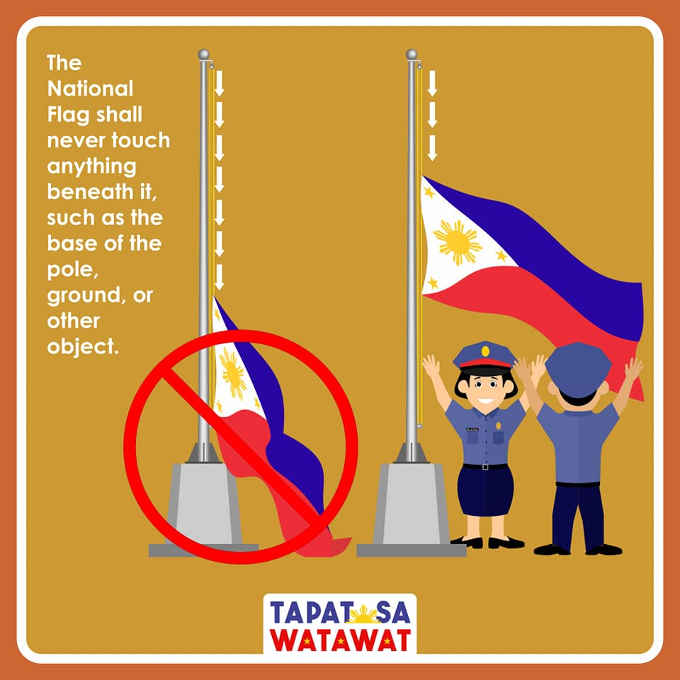 After being lowered, The National Flag shall be handled and folded solemnly as part of the ceremony. 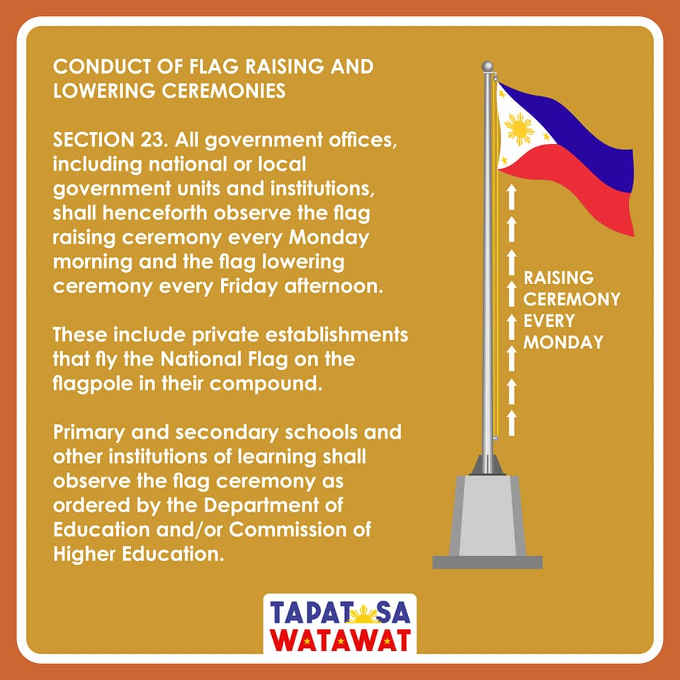 These include private establishments that fly the National Flag on the flagpole in their compound.

Primary and secondary schools and other institutions of learning shall observe the flag ceremony as ordered by the Department of Education and/or Commission of Higher Education.

How to render respect for the flag as it is raised, when it passes by, or when it is lowered.

Section 24. The observance of the flag ceremony shall be simple and dignified. 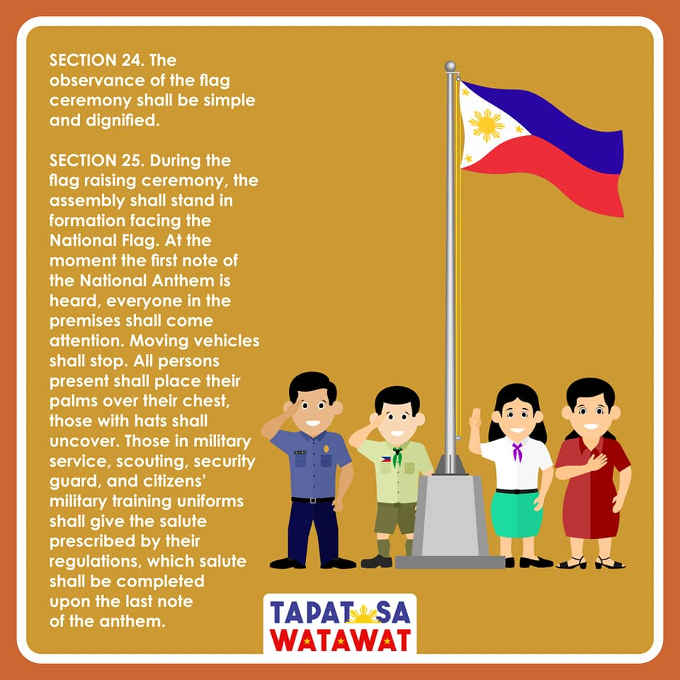 Section 25. During the flag-raising ceremony, the assembly shall stand in formation facing the National Flag. At the moment the first note of the National Anthem is heard, everyone in the premises shall come attention. Moving vehicles shall stop. All persons present shall place their palms over their chest, those with hats shall uncover. Those in military service, scouting, security guard, and citizens’ military training uniforms shall give the salute prescribed by their regulations, which salute shall be completed upon the last note of the anthem.

The same procedure shall be observed when the National Flag is passing in review or in parade. 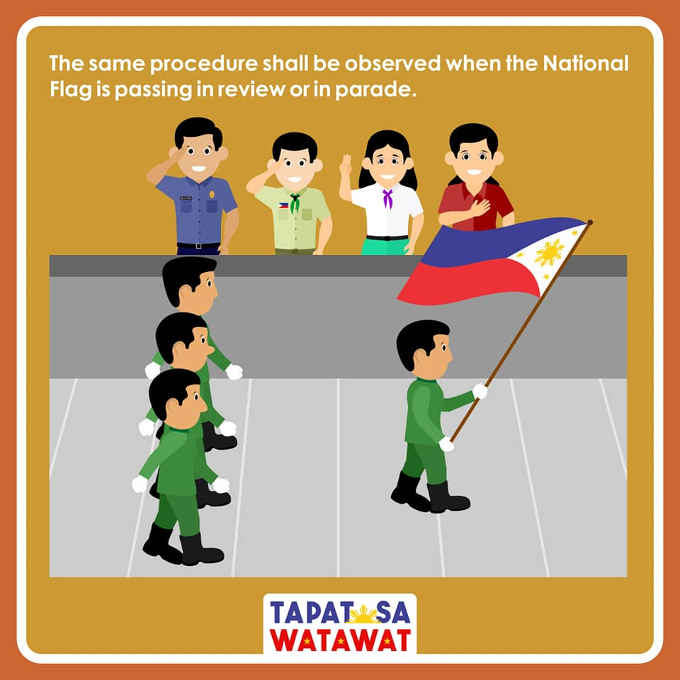 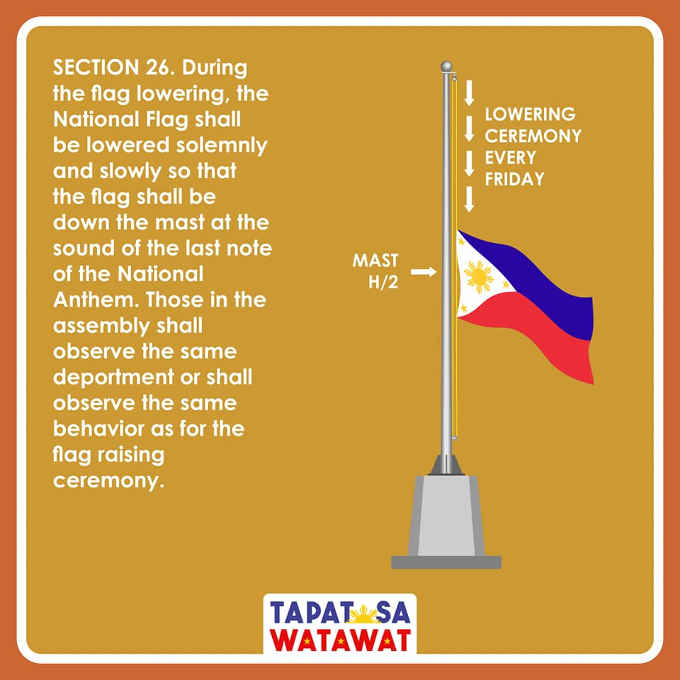 Section 50. Any person or judicial entity which violates any of the provisions of this Act shall, upon conviction, be punished by a fine of not less than five thousand pesos (P5,000.00) nor more than Twenty thousand pesos (P20,000.00), or by imprisonment for not more than one (1) year, or both such fine and imprisonment, at the discretion of the court: Provided, that for any second and additional offenses, both fine and imprisonment shall always be imposed: Provided, that in case the violation is committed by a juridical person, it’s President or Chief Executive Officer thereof shall be liable.