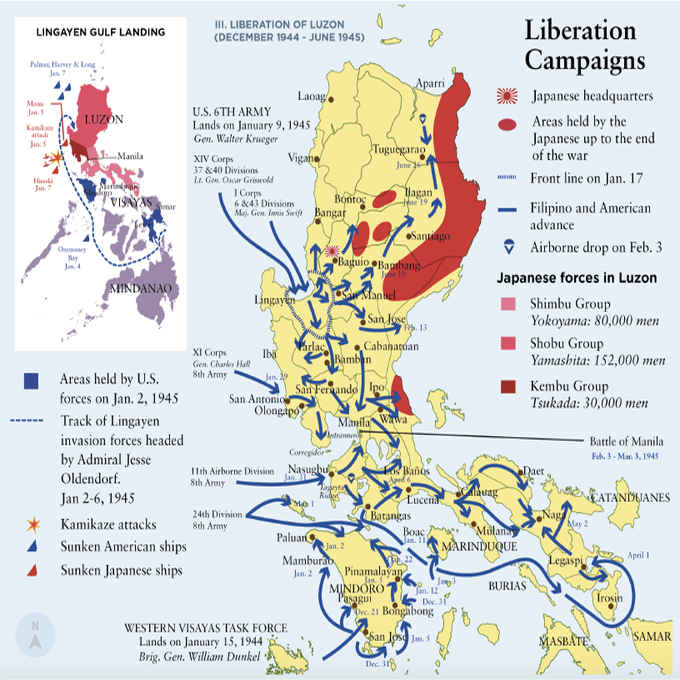 @indiohistorian via Historical Atlas of the Republic (2016)

Today in History, June 28, 1945, 75 years ago, with the cessation of hostilities in Luzon between the Allied & Japanese forces, the Northern Luzon campaign & the liberation of the entire island of Luzon has been completed.

Context: The Philippines, on the verge of independence from the United States by 1946, was invaded by Japan beginning in December 1941 to early 1945. Having reclaimed Manila at great cost, the Japanese had been on the retreat from March to June 1945.

The last Japanese holdouts in the Cordilleras were successfully compromised, so much so that while remnant Japanese forces were still there, they could no longer mount a counter-offensive vs. the campaign of the U.S. troops & Filipino guerrillas.

Today military reports came to MacArthur informing him of defeat in Luzon. On 5 July, MacArthur would announce:

“…the entire Philippine Islands are now liberated and the Philippine campaigns can be regarded as virtually closed.”

Philippine President Sergio Osmeña responded to the announcement: No event since the memorable day the American forces landed in Leyte can match the significance of this liberation, not only for us but also for the other peoples who are still in the grip of the treacherous enemy.”

U.S. President Harry Truman and U.S. War Secretary Henry Stimson also sent their congratulatory messages. By Aug., the Japanese emperor would announce via live radio that Japan intends to surrender. By 2 September, surrender would be formalized. Yamashita would in Baguio on 3 September.