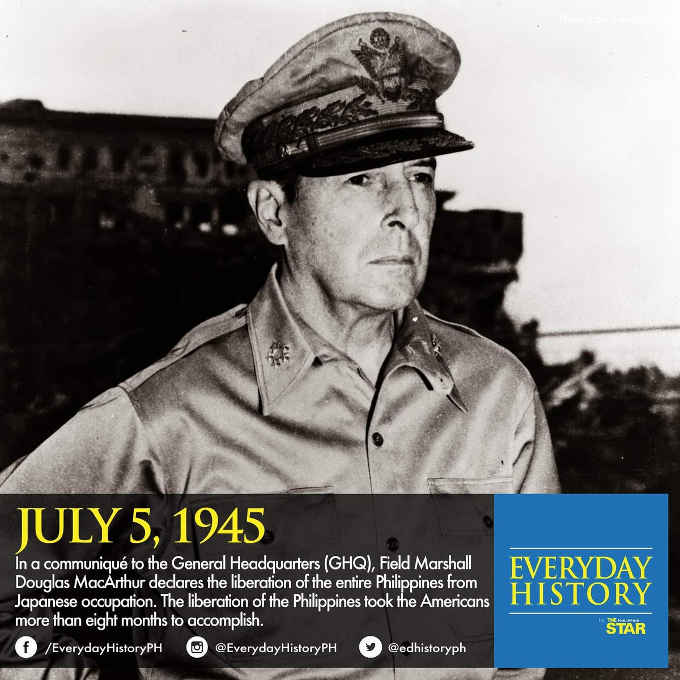 In a communiqué to the General Headquarters (GHQ) on this day, July 5, in 1945, Field Marshall Douglas MacArthur declares the liberation of the entire Philippines from Japanese occupation.

The liberation of the Philippines, which took the Americans more than eight months to accomplish, began with the Leyte Landings on Oct. 20, 1944.

It culminated in the Battle of Manila from February to March 1945 and formally ended with Gen. Tomoyuki Yamashita’s surrender in Kiangan, Ifugao on Sept. 2, 1945.

On July 5, 1992, President Fidel Ramos opened two Malacañang extension offices, one in Cebu and the other in Davao, as part of his campaign promise to make the seat of power accessible in the Visayas and Mindanao.

Malacañang Palace is the official residence of the President of the Philippines. It also houses some national government offices such as the Malacañang Museum and the Presidential Museum.

The palace is an 18th-century villa along the Pasig River located in the center of Manila. Originally a summer house built by Spanish aristocrat Don Luis Rocha, the structure was sold to Colonel Jose Miguel Formente and was later purchased by the state in 1825. It has been renovated and expanded over the decades. (kahimyang.com)

Secretary of Finance Manuel Roxas states a serious drop in government revenues is to be expected because of the paralyzation of Philippine trade with Europe, prevailing low prices of Philippine export products, and high freight rates. “Philippines will be lucky if tax collections this year will be half of those of last year”.

Socialist leader Pedro Abad Santos urges armories for every town and instruction of peasants and workers in the use of firearms so they may assist in defense of the country if necessary.