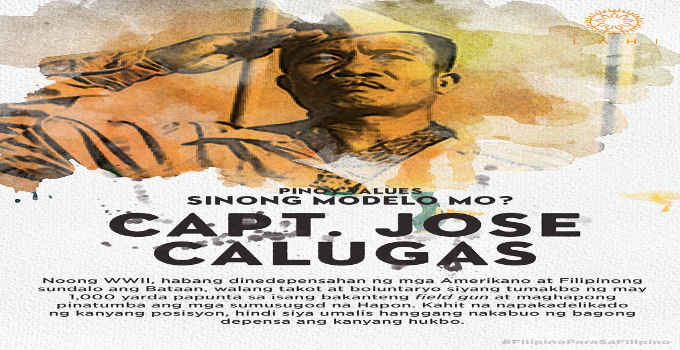 Captain Jose Calugas is the first Filipino to receive the Medal of Honor
from the United States.

He is a mess sergeant of a battery (artillery) during world war II.

The action for which the award was made took place near Culis, Bataan Province,
Philippine Islands, on 16 January 1942.

A battery gun position was bombed and shelled by the enemy until 1 gun was put
out of commission and all the cannoneers were killed or wounded.

Sgt. Calugas, a mess sergeant of another battery, voluntarily and without
orders ran 1,000 yards across the shell-swept area to the gun position.

There he organized a volunteer squad which placed the gun back in commission
and fired effectively against the enemy, although the position remained under
constant and heavy Japanese artillery fire

Captain Jose Calugas act of conspicuous deed of personal bravery or self-sacrifice
above and beyond the call of duty that distinguishes him from his comrades,
he was awarded the United States Medal of Honor.