Take your pick from BBQ, grilled chicken, banana cue, roasted corn, and other
tindagan treats from the 1st Tinindag Festival of Taysan, Batangas.

Hundreds of festivals are celebrated in the Philippines throughout the year.

Each celebration is unique from the other. 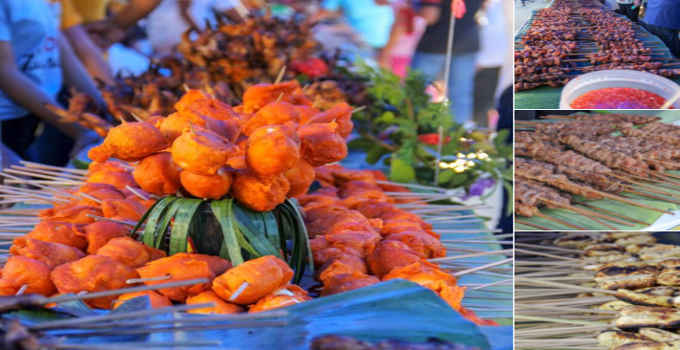 In the quaint town of Taysan, Batangas, townsfolk gathered to celebrate
their main product.

Can you guess what it is?

Taysan boast of a product so simple yet so useful, the barbecue stick or the
tindagan as it is called by the locals and so on its 100th founding anniversary,
the first ever tinindag festival was celebrated in thanksgiving of the town’s
booming stick-making and bamboo industry where townsfolk participated dressed
in their indigenous tindagan-inspired costumes.

The festive spirit of Filipino hospitality and bayanihan marked the week-long
celebration of the 100th founding anniversary of Taysan, Batangas Province,
culminating into the Tinindag Festival, in thanksgiving for the booming barbecue
stick-making industry, a main source of livelihood for local residents.

Hundreds of visitors from different parts of the country and overseas came to town
to join the centennial activities, leading to a fusion travel and culinary

Department of Tourism Region 4A officer-in-charge Maritess Castro hailed the
successful launch of the Tinindag Festival as a travel and food event that can help
develop sustainable and inclusive tourism in the area.

“Taysan could well be the Barbecue Stick Capital of World. The stick-making business
has provided opportunities for small entrepreneurs, as well as employment to the
townsfolk to support their families,” said Castro.

She noted that DOT Secretary Bernadette Romulo Puyat has underscored the vital role
of countryside communities like Taysan in advocating sustainable and inclusive
tourism that generates jobs while ensuring environmental conservation.

“We deem it fitting to hold the first Tinindag Festival on the occasion of the town’s 100th founding anniversary, as the making of tindagan (bamboo stick or
skewer) has developed into a viable cottage industry,” said Taysan Mayor
Grande Gutierrez.

Gutierrez’s wife, Elizabeth said, “I’m one of the products of pag-iistik
(stick-making) who’s been able to get through college with the additional income
my parents earned from it.

Currently, Taysan can produce P200,000 worth of sticks every week.” She noted the
stick-making activity is a “unique Taysan family tradition” as much as it is a
family business.

The family-bonding business activity proceeds to bundling of these carefully
handcrafted barbecue sticks into different sizes, namely the regular size, “dedoze,”
karioka and pino to suit the needs of food sellers.

Hundreds of families in the second-class municipality of over 98,000 residents are
engaged in the home-based manufacture of barbecue sticks, which are transported to
Lipa City, Batangas, Alabang, Muntinlupa City, Pasig City, and other cities in
Metro Manila.

“Stick-making is done in all Taysan’s 20 barangays but bulk of production comes
from Barangay Pinagbayanan, Barangay Guinhawa and Barangay Piña,” said Leah Caguitla,
35, mother of six, who inherited her parents’ stick-making business in Pinagbayanan.

Cristina Reganit, 28, started hers at age 18, along with her vegetable garden,
poultry and hog-raising businesses.