The Philippine Senate passes measure that seeks to protect women from catcalling
and other forms of street-based harassment. Senator Risa Hontiveros authored and
sponsored the bill.

A measure that seeks to protect women from catcalling and other forms of street-based
harassment was passed on third and final reading on Monday by the Senate. 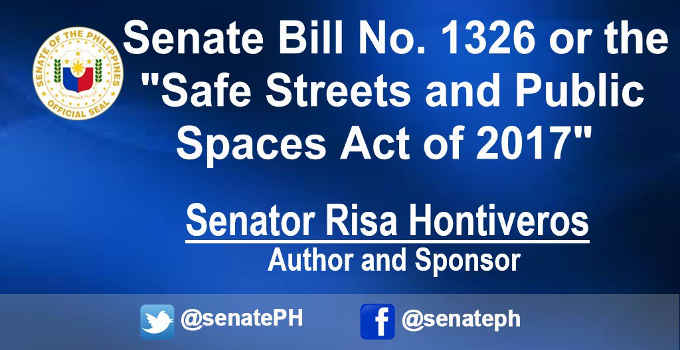 Senate Bill No. 1326 or the “Safe Streets and Public Spaces Act of 2017”, principally
authored and sponsored by Akbayan Senator Risa Hontiveros, seeks to penalize
catcalling, wolf-whistling, cursing, leering, groping, persistent requests for name
and contact details and the use of words tending to ridicule on the basis of actual
or perceived sex, gender expression, or sexual orientation and identity in public spaces.

“A major push back against sexism”

Hontiveros, who is also the Chair of the Senate Committee on Women, hailed the passage of the measure calling it “a major push back” against what she called the “growing culture of misogyny and sexism in the country.”

“At a time when sexism and misogyny seem to be the new normal, this is an important victory for all women and LGBT persons. This is a major push back against street-based sexual harassment and the culture of sexism in the country. With this measure, we will reclaim the streets from sexual harassers and make them safe for all,” Hontiveros said.

The Senator is hopeful that her bill will trigger behavioral change among Filipinos. “Through this measure, we hope to progressively change the people’s language habits, prevent different forms of gender-based harassment and convince the public of the positive effects of gender-sensitive expression,” Hontiveros said.

Meanwhile, the opposition Senator described the passage of important measures this month, many of which were pushed by the opposition, as the “Real Red October.”

Aside from the passage of the Safe Streets and Public Spaces Bill, Hontiveros pointed to the ratification of the historic Expanded Maternity Leave Law providing all working women 105 to 120 days of paid maternity leave and the passage on third and final reading of the Positive Discipline of Children Act that would prohibit corporal punishment of children at home, in schools, and other institutions. Both laws were authored and principally sponsored by Hontiveros in the Senate.

Hontiveros also said that the Philippine HIV AIDS Policy Act of 2018 is currently being deliberated at the bicameral conference level, while the Special Protection of Children in Situations of Armed Conflict (CISAC) Act is scheduled for bicameral deliberations. The former aims to adopt a multi-sectoral approach in responding to the HIV epidemic by ensuring that local communities, civil society organizations, and persons living with HIV are at the center of the process. On the other hand, the CISAC law provides protection to all children in situations of armed conflict from abuse, violence, neglect, cruelty, discrimination and other conditions prejudicial to their development. The Senator also both authored and sponsored
the said measures.

“This is our real Red October. We mark the month of October with massive victories in the passage of laws to promote and protect the health and welfare of women, including our families and children. We thank our fellow Senators and the new Senate leadership for helping us in this endeavor,” Hontiveros concluded.
Philippine Senate Press Release October 8,2018.