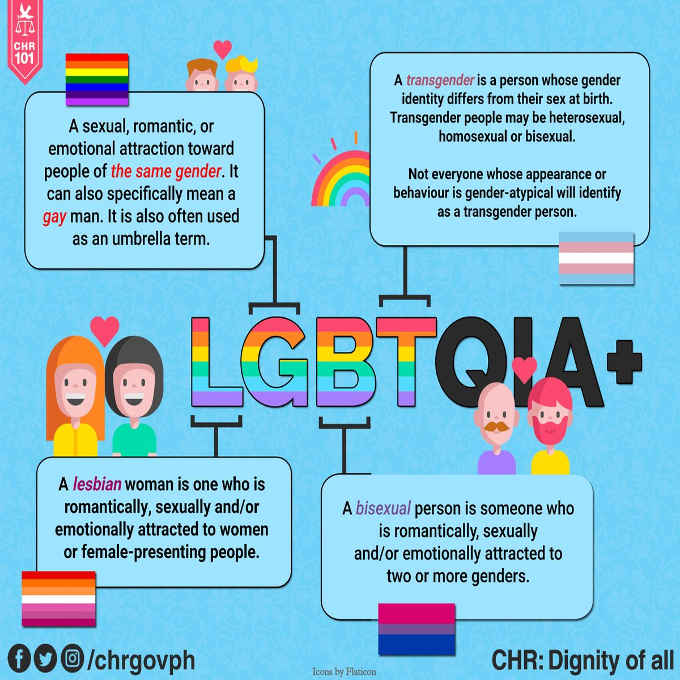 Learn about the different sexual orientation and gender identities and find out what LGBTQIA+ stand for.

Humanity is so diverse and that makes our world colorful and wonderful.

Spread the knowledge and spread the love. Let the pride colors shine bright.

What is the L in LGBTQIA+?

A lesbian woman is one who is romantically, sexually, and/or emotionally attracted to women or female-presenting people.

What is the G in LGBTQIA+?

A sexual, romantic, or emotional attraction toward people of the same gender. It can also specifically mean a gay man. It is also often used as an umbrella term.

What is the B in LGBTQIA+?

A bisexual person is someone who is romantically, sexually and/or emotionally attracted to two or more genders.

What is the T in LGBTQIA+?

A transgender is a person whose gender identity differs from their sex at birth. Transgender people may have heterosexual, homosexual or bisexual.

Not everyone whose appearance or behavior is gender-atypical will identify as a transgender person. 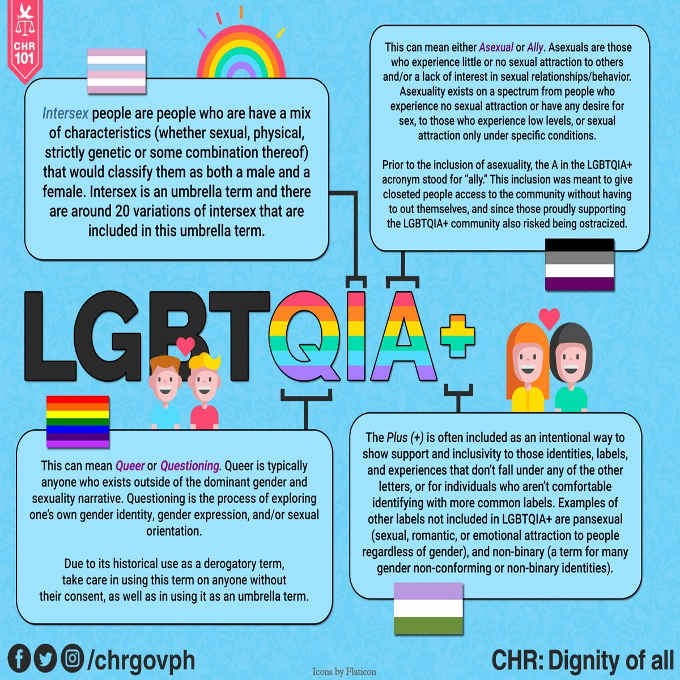 What is the Q in LGBTQIA+?

This can mean Queer or Questioning. Queer is typically anyone who exists outside of the dominant gender and sexuality narrative. Questioning is the process of exploring one’s own gender identity, gender expression, and/or sexual orientation.

What is the I in LGBTQIA+?

Intersex people are people who are or who have a mix of characteristics (whether sexual, physical, strictly genetic or some combination thereof) that would classify them as both a male and a female.

Intersex is an umbrella term and there are around 20 variations of intersex that are included in this umbrella term.

What is the A in LGBTQIA?

Asexuals are those who experience little or no sexual attraction to others and/or a lack of interest in sexual relationships/behavior.

Prior to the inclusion of asexuality, the A in the LGBTQIA+ acronym stood for “ally.” This inclusion was meant to give closeted people access to the community without having to out themselves, and since those proudly supporting the LGBTQIA+ community also risked being ostracised.

The plus (+) is often included as an intentional way to show support and inclusivity to those identities, labels, and experiences that don’t fall under any of the other letters, or for individuals who aren’t comfortable identifying with more common labels.

Examples of other labels not included in LGBNTQIA+ are pansexual (sexual, romantic, or emotional attraction to people regardless of gender), and non-binary (a term for many genders non conforming or non-binary identities).