The Senate, on Monday, gave its approval to a bill increasing by 300 percent, from
P5,000 to P20,000, the old-age monthly Filipino war veterans pension.

Senators, all 20 of those present, passed on third and final reading Senate Bill No.
1766, providing the increase to the more than 6,000 eligible living senior veterans of World War II, Korean War and Vietnam War. 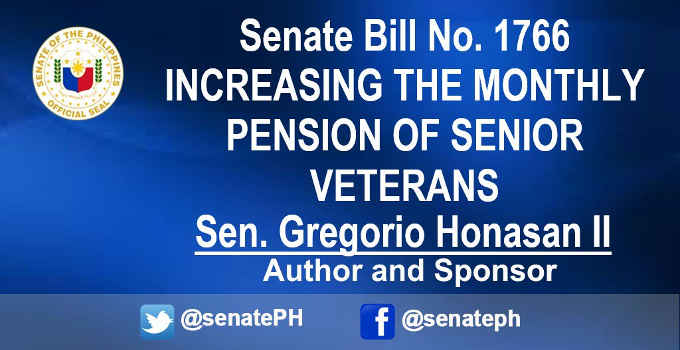 “The passage of this measure would be a fitting tribute and an act of gratitude to
our World War II veterans, the Philippine Expeditionary Forces veterans of the Korean War and the Philippine Civic Action Group veterans of the Vietnam War who sacrificed much so that we, their descendants, may live in peace and freedom,” Sen. Gregorio Honasan, principal author and sponsor of the bill, said.

“Soldiers, unlike ordinary mortals, for a great part of the prime of their lives,
lived in battlefields, away from their loved ones where, as a World War II veteran
writes, they ‘learn the ache of loneliness, the ache of exhaustion, the kinship of
misery.’ For our senior veterans, this stoicism is carried to this day as they find
themselves in another forlorn arena, battling old age and debilitating ailments as
well as financial difficulties,” the senator added.

Entitled to the P15,000 increase in the monthly old-age pension is living senior
veterans who have not been receiving a pension from the Armed Forces of the
Philippines (AFP).

It will not be transferable to any member of their family or dependents and in
the event of the death of the senior veteran, the pension of the surviving spouse shall
remain at P5,000.

The initial implementation, which would require a total budget of P1.18 billion,
will be charged against the current year’s budget of the Philippine Veterans Affairs
Office (PVAO) while the required budget for the succeeding years will be already
included in the annual General Appropriations Act (GAA), Honasan said.

The last increase given to senior veterans was in 1994, almost two and a half decades ago when the monthly old-age pension of veterans was only P1,000.
Senate Press Release, October 8, 2018.