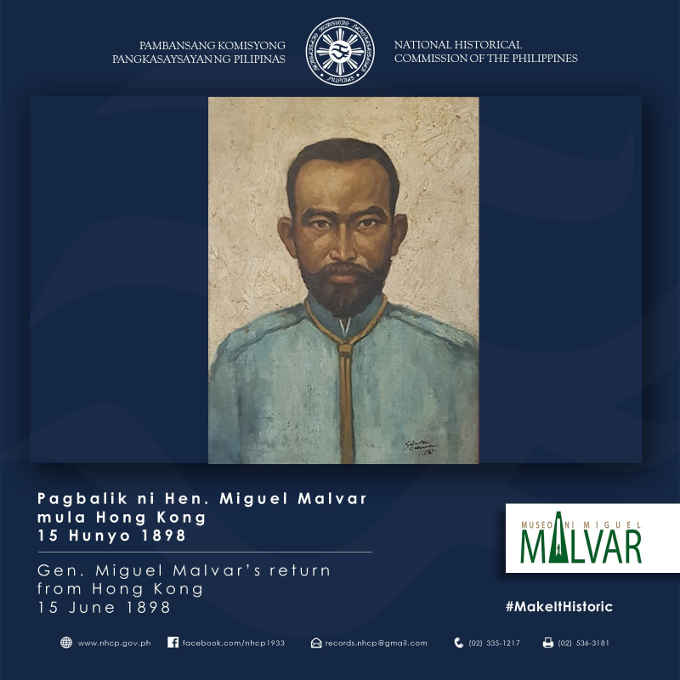 1. During the PH-US War, General Miguel Malvar was good at disguising. He roamed freely wearing a shirt and trousers rolled up to the knee without being identified by the Americans.

According to Gen. Franklin Bell’s statement in the Evening Star in April 1902, “If capture, he will appear as a simple, inoffensive and ignorant native who knows nothing and will give a wrong name. He passed American troops with a rooster under his arm and has ridden on a carabao through Sto. Tomas and Lipa, stopping at Lipa to talk to the president, without being detected.”

2. The Malvars and Rizals were close friends. After Miguel Malvar got married, the oldest sister of Jose Rizal, Saturnina, gave him P 1, 000 to start a business undertaking. Malvar was the industrial partner. It was during this time that he established a good name for being an honest dealer and one who endowed with notable business acumen.

3. On 15 June 1898, Malvar returned to the Philippines from his exile in Hong Kong. He brought with him 2,000 rifles and 200,000 ammunition. Malvar proceeded to Batangas and further intensified the revolution.

4. The General’s Last Words: “Study; for knowledge is a good friend and companion of a man.”

5. Gen. Miguel Malvar and Apolinario Mabini, proud Batangueño heroes, were schoolmates in a prestigious school in Tanauan. The school was known in Batangas for its approach in developing the intellect and character of its students. They were trained to become “unselfish souls, silent but firm” and students listened to “lectures on heroic acts of illustrious persons worthy of emulation for their civic virtues and patriotism.” Their teacher and the school’s owner, Padre Valerio Malabanan, was a native Filipino priest in Tanauan.