Home  »  Government   »   Does death penalty reduce crimes in the Philippines? 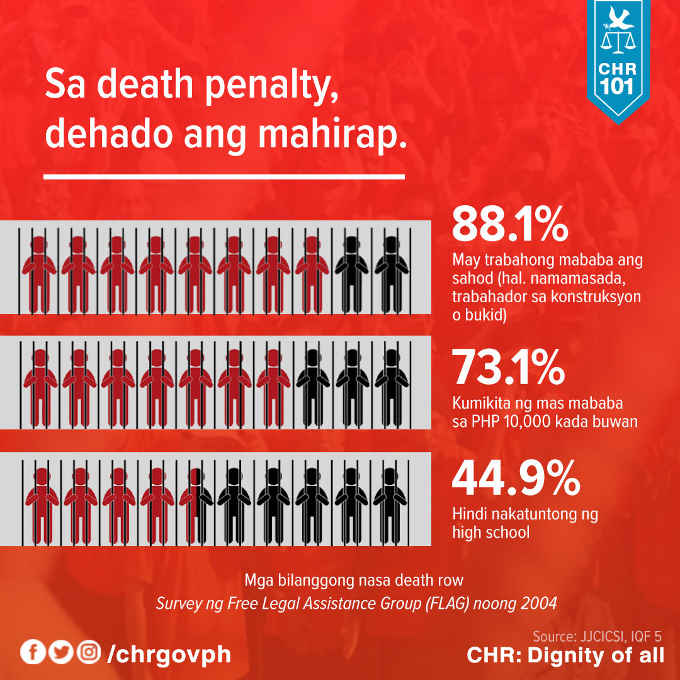 Does death penalty reduce crimes in the Philippines?

Find out some of our misconceptions about this inhumane policy.

Note: The intentional homicide rate (or planned homicide) has dropped significantly since 2006 when there was no death penalty.

Fact vs. Fake about the death penalty

Fact
There is no solid study confirming the effect of the death penalty on the prevalence of crime. The commission of a crime can be prevented by the certainty that the perpetrator will be caught and punished.

In the study involving 150 families of the victim, only 2.5% said they healed after the accused was hanged, 20% explicitly said they did not heal.

There were so many wrong convictions imposing death sentences in the past. In the case of People vs. Mateo, the Supreme Court said that of the 907 cases sentenced by the death penalty from 1993-2004, 71.77% or 651 of the convicts should not have been sentenced to death.

Fact
The execution of the accused did not bring relief to the victim’s family. It is also possible that the defendant will be misjudged.

Despite this, drug users remained over 2 million in 2015 in Iran.

Fake
The death penalty will solve the problem of illegal drugs.

Fact
Based on data from other countries, there is no clear link between the death penalty and the reduction of crimes related to illegal drugs.