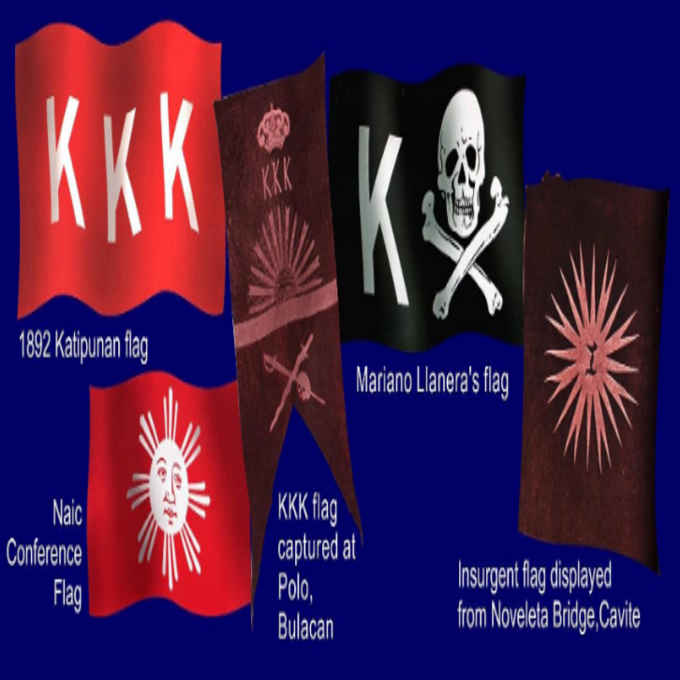 The History of Philippine Flag

A national flag is the representation of a nation’s hopes and ideals. Its physical characteristics and designs are basically linked with the noble heroism of a people who have fought for the realization of nationhood.

Flags, according to one scholar,”are not created in a single day nor are they a product of one’s whims and caprice,” but rather, the result of time and historical events. Changes in ideologies and aspirations brought about by the advent of new values and standards have greatly influenced the appearance of flags. one thing is permanent, however: flags will forever symbolize the true essence of nationalism.

The Philippine flag that we see fluttering gaily in the wind is a product of different epochs in our turbulent history. Its birth came at a time when the nation was on the threshold of a revolution.

The saga of our national flag is filled with tales of heroism and courage of those who gallantly fought for the country’s freedom and independence. it is a bittersweet story of a people’s ultimate sacrifice to free its beloved land from more than three hundred years of bondage and servitude.

For centuries, even before the Iberians landed on our shores, our forefathers did not have what can be called a national flag. With all the attempts or rebellions listed in history to thwart the oppressive Spanish rule, Filipinos never used a common flag. The Spanish flag flew over the archipelago as Spain’s colony.

There were, however, incidents when prior to 1898, Filipinos unfurled their own “banners” to awaken the sentiments of the people. Diego Silang in Ilocandia and the Cavite Uprising of 1762 used banners made of simple cloth with crude symbols to rally the populace. However, these so-called flags did not receive widespread recognition.

During the Philippine Revolution of 1896, various revolutionary groups sprouted in the provinces. Following the cry at Pugadlawin, the Katipuneros present waved a simple banner, which was distinguished by a “red rectangular field with three letters arranged in a row or in an equilateral triangle in the middle.” The three K’s stood for Kataastaasang Kagalanggalang Katipunan or the Most High and Most Sacred Society.

Some Leaders of various units relied more on their own initiative during those crucial battles and likewise adopted their own flags or war standards. Andres Bonifacio’s personal flag, which had a sunburst with an indefinite number of rays and three-letter K’s underneath it at the center of the field, symbolized the Supremo’s leadership and the aspirations of the freedom fighters.

The flag brandished by the Katipunan in Cavite, on the other hand, consisted of a red rectangular banner (a standard for revolutionists), with a white K in the ancient Tagalog script placed in the center of a sun, which was represented by a white circle and, just like Bonifacio’s flag, had an indefinite number of rays. This flag was used from 1896 – 1897. Other flags were unique such as the one used by Mariano Llanera in Nueva Ecija. Another skull flag was used by revolutionaries in Noveleta.

The making of the national flag of the Philippines took place beyond its borders. General Emilio Aguinaldo, who was exiled in Hongkong in 1897, requested Doña Marcela Mariño de Agoncillo, a native of Taal, Batangas, to sew the Filipino flag. The flag was to rally the people to the cause of freedom. Stirred by such an important task, Doña Marcela, who at that time was based in Hongkong with her husband Felipe Agoncillo, secured the help of her daughter, Lorenza, and Mrs. Delfina Herbosa de Natividad, the niece of Dr.Jose P. Rizal.

The flag was made of silk with a white triangle containing a five-pointed star placed at each angle of the triangle, and a mythological sun with eight rays signifying the Sun of liberty and the eight provinces that the colonizers had placed under martial law in 1896. It also had a blue field and a red field. The white triangle represented the emblem of the Katipunan. the blue for aspirations of the Filipino people and the red, patriotism. On the other hand, the three stars first represented the three islands of the country, Luzon, Panay, and Mindanao where the Philippine revolution began. The representation for Panay was later expanded to all the islands in the Visayas.

Before the flag was raised in Kawit, it was first unfurled at Cavite Nuevo (now Cavite City) on May 28, 1898, to celebrate the victory of Aguinaldo’s troops in the Battle of Alapan. On the 12th of June, Ambrosio Rianzares Bautista unfurled the tricolor, which was adopted by the Junta Patriotica in Hongkong, at the window of Aguinaldo’s house moments after the country’s long-sought independence was proclaimed.

Sadly, it was a short-lived independence, the fledgling nation was once again invaded by new colonizers from across the Pacific. When the Philippines came under American rule, the new regime passed a law prohibiting the display of the tricolor. It was therefore a crime for any Filipino to fly the flag in his native land.

However, throbbing nationalism could not be killed in each and every heart of the Filipino. After years of skillful negotiations, by virtue of an Executive Order signed by Francis Burton Harrison on October 30, 1919, the Philippine flag was once again allowed to fly in any place. However, since it was more than a decade when the flag was seen publicly, there were minor dissimilarities with its physical attributes. To remedy the situation, in 1936, the new President of the Commonwealth, Manuel L. Quezon, issued EO No.23, which prescribed the technical description and specification of the Filipino flag.

The present flag, which we now pay homage to, is the same flag that was decreed by Quezon. Although some modifications were made, the flag has remained basically unchanged since it was unfurled more than a century ago in that historic and dramatic occasion in Cavite.