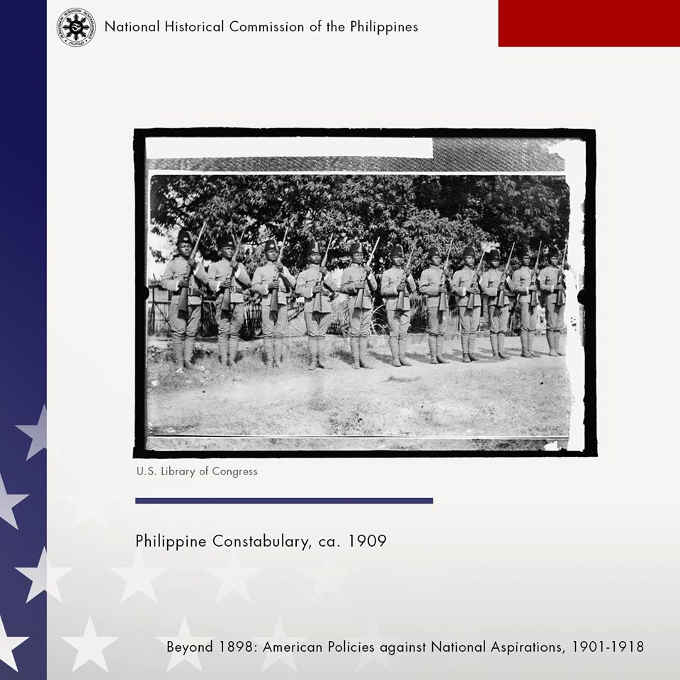 Insular Constabulary (Act No. 175) | National Historical Commission of the Philippines

The Insular Constabulary (later called Philippine Constabulary) composed of the Filipino police was organized to uphold order throughout the Philippines, especially when the American soldiers left after the Philippine-American War. As part of its police work, the constabulary was tasked to suppress those who continued fighting and to implement the laws against them such as the Brigandage Act and the Reconcentration Act.

The police during the early American period, although considered as 1st civil police in the Philippines, was counter-nationalistic. It was created primarily to suppress Filipino nationalist leaders during and after the Philippine-American War.

For example, it was the Manila police who captured Artemio Ricarte on 1 July 1900 and continued to foil his plans of liberating Manila until 1914. It was also the Manila police who persecuted Aurelino Tolentino, Dominador Gomez, and other “radical Filipinos,” and imposed oppressive laws such as the Sedition Law, the 1906 Flag Law, and the Bandolerismo Statute, among others.

The police during this period also, according to historian Alfred McCoy, “succumbed to systematic graft, producing venality by both Filipino and American detectives.” They became engrossed in bribery, street violence, corruption, drug smuggling, and other crimes. These issues were so grave that several newspapers such as the Free Press and leaders like Manuel Quezon demanded solutions for rampant police crimes.