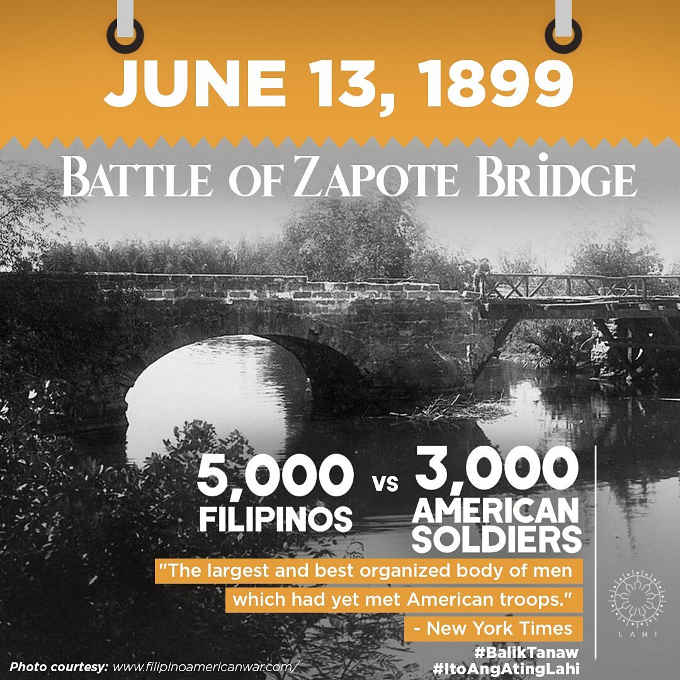 The Battle of Zapote bridge is the largest and best-organized body of men which had yet met American troops as described by the New York Times. (lahi)

The action at Zapote, Cavite is also known as the Battle of Zapote River. It was fought on June 13, 1899, between 3,000 American soldiers led by Maj. Gen. Henry Ware Lawton and 5,000 Filipinos commanded by Generals Artemio Ricarte and Mariano Noriel. It was the largest battle of the Filipino-American War. It was this battle that Filipino soldiers earned the respect of General Lawton, whose dispatches invariably carried a sympathetic note of the heroism displayed by Filipinos fighting for their freedom.

Capt. William H. Sage, 23rd US Infantry Regiment, won his Medal of Honor by volunteering to hold an advanced position. With 9 men he fought under heavy fire from the Filipinos. Taking up a rifle from a wounded man he personally killed 5 Filipinos and held them in check until his squad had reached the safety of the American line. (Sage, West Point Class of 1882, rose to Brigadier General and served with the American Expeditionary Forces in France in World War I.)

The New York Times reported that the Filipino force at Zapote Bridge was “the largest and best-organized body of men which had yet met American troops.” Accurate American rifle and machine-gun fire inflicted terrible losses on the Filipinos, who were armed with a motley of firearms or bolos, and did not have the firepower to successfully retaliate on most occasions. American gunboats also devastated the Filipino positions.(filipinoamericanwar.com)

Zapote River separates what is now the city of Las Pinas in Metro Manila from Bacoor, Cavite. Zapote Bridge in ruins still stands along the General Emilio Aguinaldo Highway near Manila Bay.