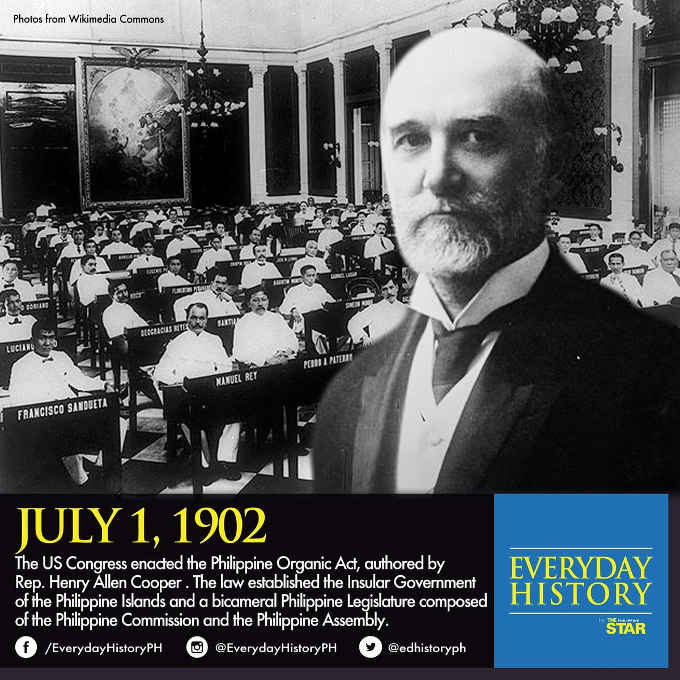 The law established the Insular Government of the Philippine Islands and served as its basic law.

The Philippine Assembly or the lower house were composed of elected Filipino members.

It was the beginning of a civilian American government with Filipino participation in the Philippines.

Alejandro sang Cayabyab’s winning entry in the 1978 Metropop and then went on to win the Grand Prix of that year’s Seoul World Music Festival. It was the first time that the Philippines won a top international award in a songfest. (kahimyang.com)

On July 1, 1788, Felix Berenguer de Marquina arrived in Manila and assumed his post as governor-general of the Philippines. De Marquina made Manila an open port to all foreign commerce. Manila and Cavite were fortified and the Spanish military force increased.

Marquina took many pains to have the Obras pias honestly administered. He ordered that the nipa houses which still existed within the walls of Manila should be torn down, as being both disfigurement and a danger to the city. During his term of office, a severe epidemic of smallpox was experienced in the Islands; he gave large sums to the parish priests to relieve the poverty caused by the pestilence.

The islands during his time were ravaged by the Moros year after year, the naval force of the Spaniards doing little more than to remain on the defensive. He wrote the King in 1789 saying that “the continual warfare of the Moros was evil without remedy”. It is recorded that the terms of Basco (his predecessor) and Marquina’s (in all, fifteen years), spent over 1,500,000 pesos fuertes in building and arming vessels to chastise the pirates.

Marquina proposed that Filipinas should be made a viceroyalty, and the viceroy be rendered independent of the Audiencia and of the religious orders. Among many other reforms he proposed were:

The reform of the chief accountancy by limiting its exorbitant powers; The establishment of an acordado, or a sort of police, in the provinces, directed rather to intimidating and restraining criminals by means of vigilance than to punishing them with harshness and violence; Allowance of fixed and decent salaries to the alcaldes-mayor, and putting a stop to their trading (which absorbed all their time, with great risks to impartial conduct and justice);

The desirability of abolishing the odious monopolies on playing-cards and gunpowder; The transfer of the natives from the Batanes Islands to Cagayan, on account of the wretched condition of the former; and the advantage of occupying, in preference to the Batanes, the island of Mindoro – which was richer, and nearer to Manila, and at the time reduced to the utmost indigence by having been abandoned (by its inhabitants) and by the incursions of the Moros.

Taking advantage of the eluvial gold deposit, so abundant in the country, from which was obtained no less than 200,000 pesos worth of gold a year; The establishment of a mint, with which the exportation of gold from the country would be avoided.

However, Marquina was met with much trouble in his government, from “class interests” and from the ingratitude of those whom he had helped. He resigned his office in 1793 and returned to España “poor and disheartened”.

Felix Berenguer de Marquina was accused of selling offices through the agency of a woman. He suffered a hard residencia and was not permitted to depart for España except by leaving a deposit of 50,000 pesos fuertes, with which to be responsible for the charges made against him. At Madrid, he was sentenced to pay 40,000 pesos.