Plaza Roma is bounded by the Manila Cathedral to the southeast, the Palacio del
Gobernador to the southwest and the Ayuntamiento to the northeast.

This small plot of land is Intramuros’ very own plaza mayor (main square). 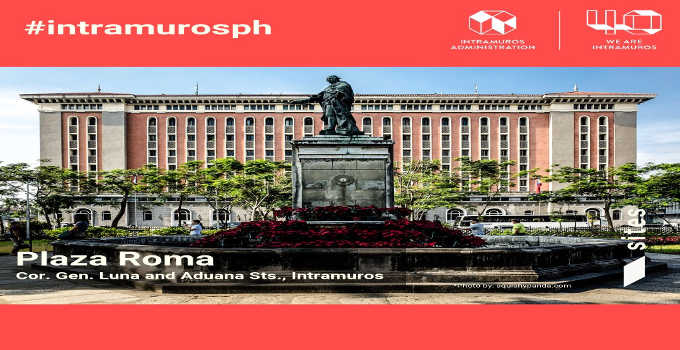 Plaza Roma is located at the corner of General Luna and Aduana streets in
Intramuros, Manila.

Plaza Roma was the Plaza Mayor during Spanish Intramuros. It was used as a venue for
bullfights and other public events until 1797 when Governor-General Rafael Maria de
Aguilar turned it to a garden enclose with iron fence. During the American period,
the plaza was named Plaza McKinley, in honor of a US president. When Rufino Santos
became the first Filipino cardinal, the plaza was renamed Plaza de Roma, and to
return the honor, Rome also named one of their plazas as Piazza Manila.

The plaza is a prototype of the Spanish colonial city planning. Like in most old towns
in the Philippines, where the church, the municipal hall and houses of keys officials
surround an open court, Plaza Roma is surrounded by what used to be major government
buildings.

Standing at the center of the plaza, cast in bronze, is the regal statue of King
Carlos IV. The statue was locally made at Fort Santiago’s royal foundry or the
maestranza. It was erected to honor the king for sending the first smallpox vaccine
to the colony.

East of the plaza is the ruins of the Ayuntamiento or Casas Consistoriales. During
its glory days, the Ayuntamiento was the center of political and public affairs
and the core of the city government. Housed within its walls were several offices
including the residence of the mayors, a prison, the government archives, and
elaborately-furnished function halls like the salon de baile (ballroom) and the
municipal board session hall.

It was in this building where the Spanish Governor General Fermin Jaudenes and
American General Wesley Merrit signed the official change of colonial power.
During the American period, the session room was used by the First Philippine
Assembly in 1907 headed by Sergio Osmena and later by the Philippine Legislature.
The Supreme Court and Bureau of Justice also held office in the Ayuntamiento until
its total destruction in 1945.

In the original plan of Manila designed by Gobernador General Miguel Lopez de Legaspi,
the west side of Plaza Roma was reserved for the governor’s palace. But the first
official residence of the Spanish Governor General or the Palacio Real was located
within Fort Santiago. It was only after the 1583 fire when a royal residence arose on
the site assigned to it.

An earthquake destroyed the palace during the governorship of the tragic Alonso Fajardo
(1618-1624). Two decade later, the mansion of former member of the Real Audencia
(Supreme Court) Manuel Estacio de Venegas rose from the site of the palace. When
Venegas got involved in several controversies, the dazzling mansion he had built
was confiscated. Since then, it became Palacio de Gobernador.

For 200 years its great halls resounded with the tumult of colonial politics. It
was on the palace stair where Governor Fernando Bustamante and his son were
assassinated by a mob incited by friars. The British invaders enthroned themselvesduring their two year of empire over Manila.

The last governor to reside in the palace was General Rafael Echague. It was during
his term when the terrible Corpus Christi earthquake of 1863 leveled all Manila to
the ground. The palace was toppled. The Governor General moved to Colegio de Santa

Potenciana while repair are being made to the building. Construction was stopped
when a summer residence in San Miguel (Malacañang) was favored as the new official
residence of the Governor General. On the site now stands, in its monstrosity the
Palacio del Gobernador Condominium.

Facing Plaza Roma is the Manila Cathedral. The present Cathedral is the sixth church
to be erected on the site. The Church of Manila was originally governed by friar
orders until 1581 when Pope Gregory XIII created the diocese of Manila elevating
the church to a cathedral under the title of the Inmaculada Concepcion de la Virgen
Maria. Its first bishop was Fray Domingo Salazar. In 1581, Salazar immediately
started building a cathedral replacing the old parish of Manila, which was completed
in four years.

The important episode of the Cathedral long history is depicted in its bronze doors
from it humble beginnings as a church made of nipa and bamboo to the destruction of
the last Cathedral brought by the Liberation of Manila in 1945. Today, the
reconstructed Manila Cathedral is celebrated for its architectural mix of
Neo-Romanesque and Neo-Byzantine –the Art of Manila Cathedral.(Traveler on Foot)