Home  »  Government   »   Philippines and Jordan | Facts You Need To Know

President Rodrigo Duterte just concluded his historic visit to Jordan. He met
King Abdullah II Al-Hussein, the head of state of the Hashemite Kingdom of Jordan.

The Philippines and Jordan established relations on March 1, 1976.

Elnora Agulto is the Filipina Private Secretary of Queen Alia, who also joined King
Hussein’s 1976 trip to the Philippines.

42 years later, on September 5, 2018, President Rodrigo Duterte returns the visit
of King Hussein to the Philippines as the first sitting Philippine President to
undertake an official visit to Jordan. 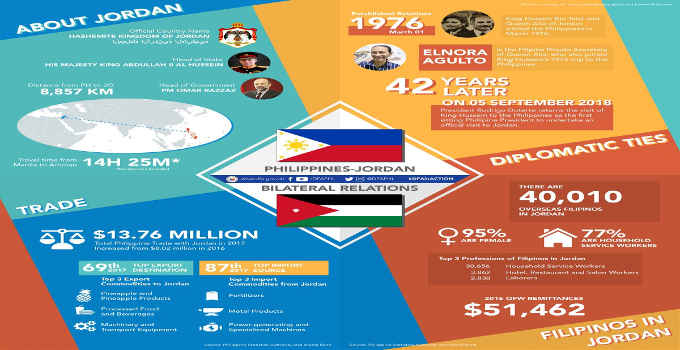 Here are some facts you need to know about the Philippines and Jordan bilateral
relations.

During this historic visit of President Duterte, he agreed to deepen military
cooperation with the Middle Eastern nation to fight extremism.

He wrapped up his official visit to Jordan on Friday, a day earlier than scheduled,
bringing home $60.675 million in Jordanian investments.