The Aduana (Customs House) was a Spanish colonial structure that once housed a number of government offices such as the Philippines mint and the offices of the Central Administration (Intendencia).

The Aduana Building is located in Magallanes Drive in Intramuros Manila. 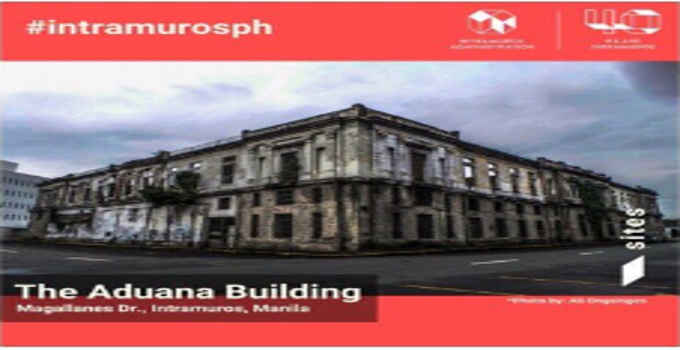 The Aduana replaced the Alcacería de San Fernando (built 1752), located on the opposite or northern bank of the Pasig.

Tomás Cortes was given charge of the project.

In 1822, he submitted plans for the project and construction began in 1823.

Despite objections that the new Aduana had insufficient space for warehousing and was too far from the port, construction continued and in 1829 the building was completed.

It was a handsome building designed in the Neoclassical tradition. Built around two atriums, the central bay had three-arched entrances and two principal staircases. This was flanked by two symmetrical wings of three stories.

Its rectangular fenestration and French windows on the uppermost story were decorated with rustication.

The firm of Manuel Perez repaired the building’s roof in 1861, following plans by
Luciano Oliver.

The earthquake of 1863, 1869 and 1872 damaged the building. Reconstruction of the Aduana was awarded to Luis Perez Yap-Sionjue who began work in 1874.

Plans for reconstruction were drawn by Luis Cespedes after an earlier plan by
Felix Roxas, Sr. and an anonymous architect were found deficient.

The building served as a central treasury.

In the 20th century, it became the Central Bank Building and a cement vault was built in the atrium.

The building was damaged by war but was repaired and remained as the Central Bank until the completion in the 1970s of a new Central Bank along Roxas Blvd.

The building was damaged by fire and left abandoned for a long time. The structure is presently being restored to become the National Archives for records of the Spanish colonial period. Restoration began in 1996 during the centennial of the Philippine Revolution.