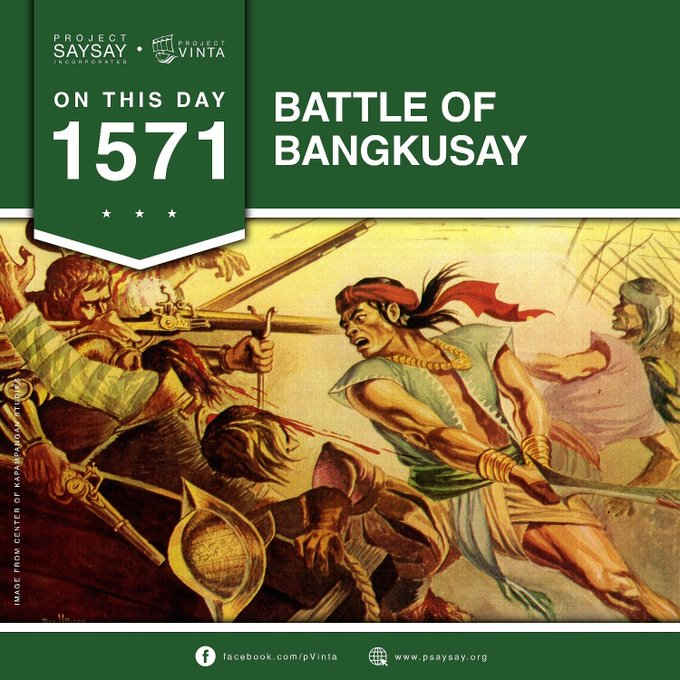 On this day, June 3, in 1571, our ancestors declared war against the newly arrived Spaniards in Luzon. This became known as the Battle of Bangkusay, which happened at the shores of Tondo via Bangkusay in Manila Bay.

The leaders (called datu) on the opposite side of Manila Bay objected to the welcoming of the leaders of Pasig to the Spaniards in May 1571.

These rulers were Rajah Matanda and Soliman of Manila and Lakan Dula of Tondo and the defiant datus were from the present-day provinces of Pampanga and Bulacan.

Lakan Dula failed to convince the said leaders to accept the Spaniards and instead received insults for surrendering to a small number of foreigners.

On 31 May 1571, these obstinate people from north of Manila Bay launched an armada of 2,000-strong warriors riding in 40 caracoas–notable gigantic warships of Southeast Asia–and landed in Bangkusay. They were led by a general from the ancient place named Macabebe.

Unfortunately, primary sources failed to record his name, except for one which identified him as Bambalito. (The National Historical Commission of the Philippines [NHCP] disputed the name to be indigenous as it is more Spanish. It means ‘little insane.’)

The Macabebe general refused the bribes and benefits offered to him by the emissaries of Gov. Gen. Miguel Lopez de Legazpi.

Insulted, the said brave leader unsheathed his sword, pointed it to the Spaniards, and uttered the words “May the sun split my body in twain, and may I fall in disgrace before my women for them to hate me if I ever became for a moment friend to the Castilians.”

He challenged Legazpi in a war in Manila Bay. On June 3, 1571, the battle ensued and the Macabebe general led his men at the forefront, discharging their swivels guns called lantaka mounted on their warships. Unfortunately, he was hit by a bullet resulting in his death.

His warriors were demoralized and the battle ended as if a magnet was taken away and the magnetite disperse.

As a consequence, Manila was declared as a city on the same day and twenty-one days later the Spaniards formally established the Spanish administration in Manila.

If our ancestors won the battle, Luzon could have been so different and the Spaniards would have just concentrated their power in the Visayas.