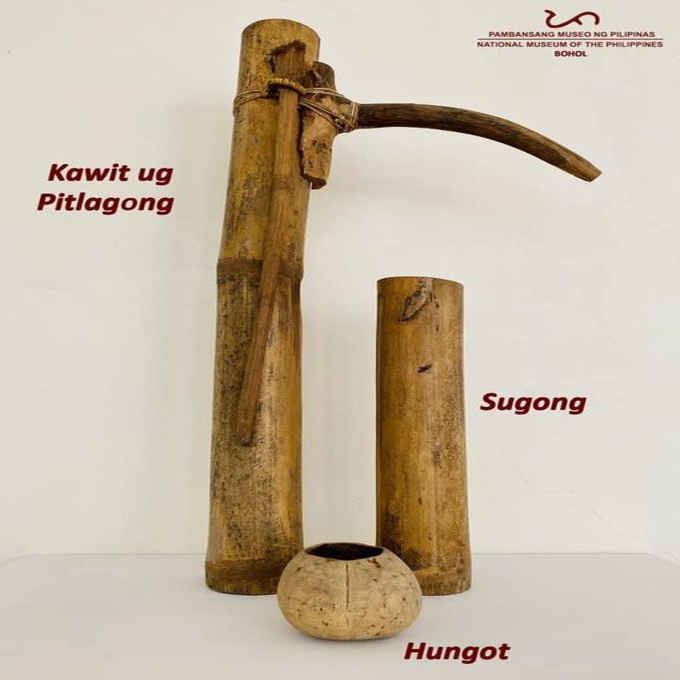 Have you tasted tuba, bahal or bahalina? Know how this native drink is naturally acquired:

In the Visayas, the coconut wine is called tuba, bahal, and bahalina, depending on the fermentation and aging process. Tuba is a fresh or mildly fermented sap tapped from the young unexpanded coconut inflorescences or bungaw. A sugong (bamboo container) is hung under the bungaw to collect dripping juice. It is covered with ginit, a soft coconut fiber that also functions as sieve, in which dried mangrove bark called tungog is mixed to enhance taste and potency.

A manananggot (tuba gatherer) climbs the coconut tree every morning to collect the overnight accumulation of sap and before sunset to collect the trickled juice during daytime. He is fully geared with kawit, a tuba container made of bamboo attached with pitlagong (bamboo brush), and suspended on his waist is the sanggot, a sickle-shaped knife to cut the tip of the bungaw. With the day’s collection of tuba, the manananggot is now ready to taste the wine using his hungot, a glass made of coconut shell. Tuba harvested in the early morning and consumed during the day tastes sweet. Others prefer to pass consuming it until the next day or so for a strong sour taste. In Bohol, tuba could also be used as ingredients in making torta and kinilaw. They also mix tuba with milk, tableya, and egg to make kinutil.