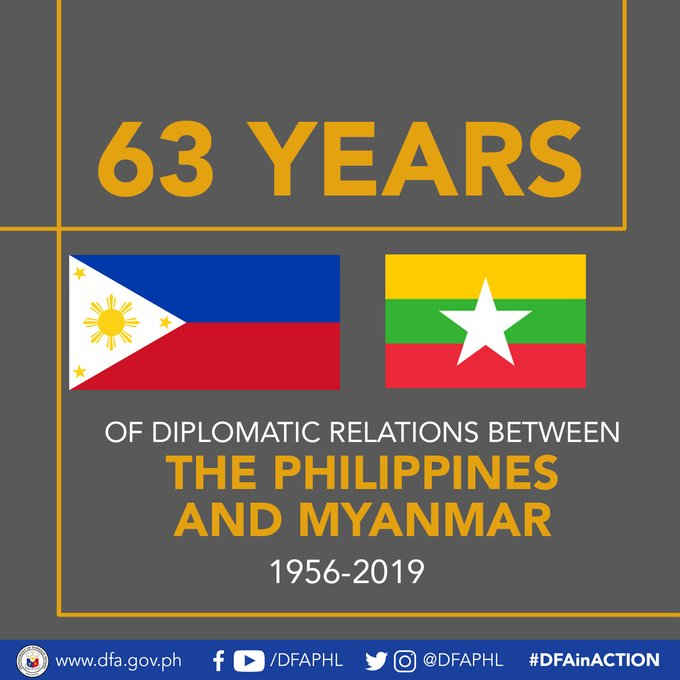 On this day, September 29, we celebrate 63 years of the establishment of formal diplomatic relations between the Philippines and Myanmar.

The Philippines established diplomatic relations with Myanmar in 1956.

The flight time from Manila to Yangon, Myanmar is 5 hours and 55 minutes. The nearest airport to Yangon is Mingaladon Airport.

The distance from Manila to Yangon, Myanmar is approximately 2680 kilometers.

Philippine time 1 hour and 30 minutes ahead of Yangon, Myanmar.

With around 1,291 Filipinos in Myanmar as of December 2018, the Philippines has an Embassy in Yangon.

The Philippine Embassy in Myanmar is located at No.50 Saya San Road, Bahan Township, Yangon, Union of Myanmar.

In its inaugural session, Congress ratified the Declaration of Independence that Ambrosio Rianzares Bautista wrote and proclaimed in Kawit, Cavite on June 12, 1898, upon orders from President Emilio Aguinaldo.

The ratification established nationwide recognition for the independence of the Philippines and Aguinaldo’s Revolutionary Government, repeating but with much wide recognition the events during the Bacoor Assembly on August 1, 1898.

In his speech after the Malolos Congress passed into law, Aguinaldo said, “Now, we witness the truth of what the famous President Monroe said to the effect that the United States was for the Americans; now I say that the Philippines is for the Filipinos.”(http://everydayhistory.ph)