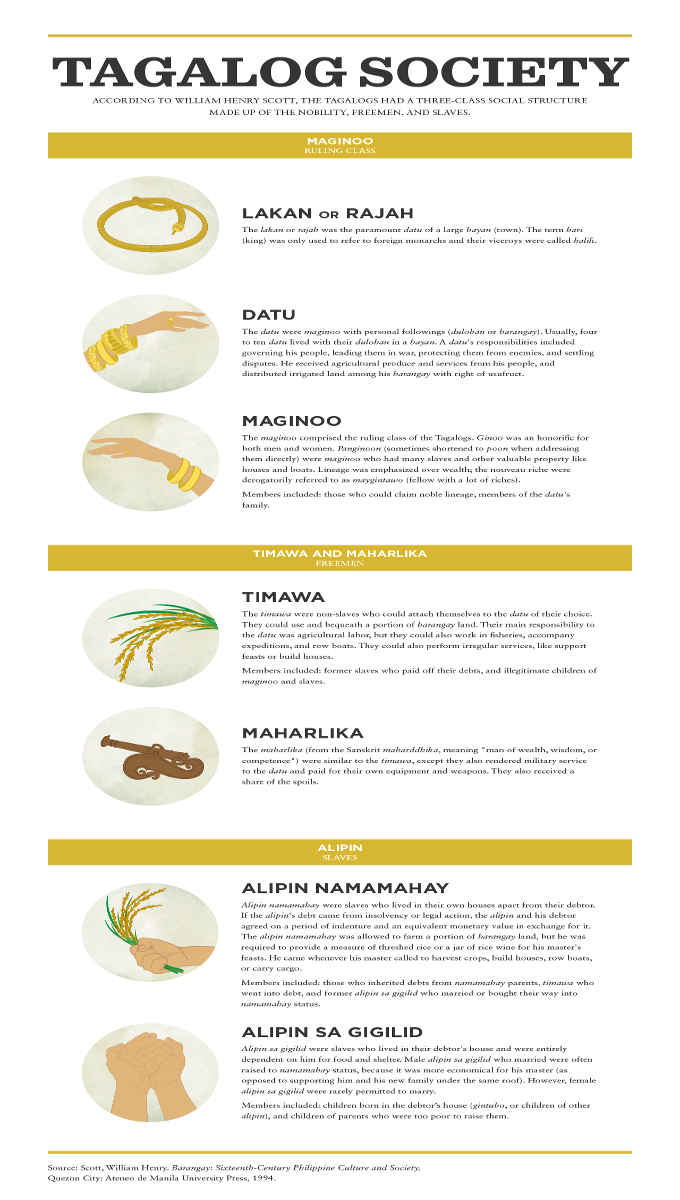 The Tagalog Society had a three (3) class social structure made up of nobility, freemen, and slaves.

The Lakan or Rajah was the paramount Datu of a large town (bayan). The term hari (king) was only used to refer to foreign monarchs and their viceroys were called halili.

The Datu were maginoo with personal followings (dulohan or barangay). His responsibilities included governing his people, leading them in war, protecting them from enemies, and settling disputes. He received agricultural produce and services from his people and distributed irrigated land among his barangay with the right of usufruct. Usually, four to ten datu lived with their dulohan in a town (bayan).

The Maginoo comprised the ruling class of the Tagalogs. Ginoo was an honorific for both men and women. Panginoon (sometimes shorted to poon when addressing them directly) were maginoo who had many slaves and other valuable property like houses and boats. Lineage was emphasized over wealth; the nouveau riche were derogatorily referred to as maygintawo (fellow with lot of riches). Members include those who could claim noble lineage, members of the datu’s family.

The Timawa were non-slaves who could attach themselves to the datu of their choice. They could use and bequeath a portion of barangay land, and rendered services and agricultural labor to the datu. Their main responsibility to the Datu was agricultural labor, but they could also work in fisheries, accompany expeditions, and rowboats. They could also perform irregular services, like support feasts or build houses.

Members included are illegitimate children of Maginoo and slaves, and former alipin (slaves) who paid off their debts.

The Maharlika (from the sanskrit maharddhika, meaning “man of wealth, wisdom, or competence”)
were similar to the Timawa, except they also rendered military services to the datu and paid for their own equipment and weapons. They also received a share of the spoils.

Aliping namamahay were slaves who lived in their own houses apart from their debtor. If the alipin’s debt came from insolvency or legal action, the alipin and his debtor agreed on a period of indenture and an equivalent monetary value in exchange for it.

The Alipin namamahay were allowed to farm a portion of barangay land, but they were expected to turn over a portion of their harvest to their master. He came whenever his master called to harvest crops, build houses, rowboats, or carry cargo.

Members included those who inherited debts from namamahay parents, timawa who went into debt,
and former alipin sa gigilid who married or bought their way into namamahay status.

Members included those children born in the debtor’s house (e.g. children of other alipin, or gintubo), and children of parents who were too poor to raise them.(source)