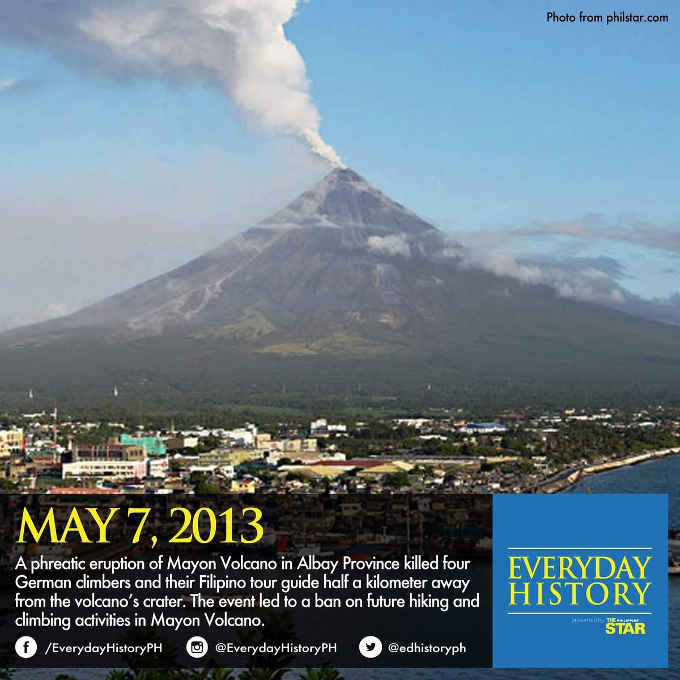 On this day, May 7, A phreatic eruption of Mayon Volcano in Albay province killed four  (4) german climbers and their Filipino guide half a kilometer away from the volcano’s crater. The event led to a ban on future hiking and climbing activities in Mayon Volcano.

The eruption spewed steam and rocks that fell on the climbers, which led to their deaths. The five were part of a group of 27, which set out from Bacacay town to the summit of the volcano.

Seven other climbers were injured in the eruption. The event led to a ban on future hiking and climbing activities in Mayon.

The Pearl of Lao Tzu (also referred to as Pearl of Lao Tze and previously as Pearl of Allah) used to be the largest known pearl. The pearl was found in the Palawan sea, which surrounds the island of Palawan in the Philippines, and was found by a Filipino diver.

But this record was broken when in 2006, the World’s largest pearl (34kg) was found at Palawan, Philippines. The pearl was found by a fisherman who was unaware of its value and kept it as a good luck charm.

The pearl is 1ft (30.5cm) wide and 2.2ft long and, if confirmed, will easily beat the current record holder, the Pearl of Lao Tzu, which weighs 6.4kg.(bbc)

May 7 of every year is declared by virtue of RA 10069, known as Health Workers’ Day Act, as a special working holiday to be known as “Health Workers’ Day” to give due recognition to the important role and contributions of the health workers who provide vital health services to our people and to promote their rights and welfare and enhance their sense of worth and dignity.