Home  »  Lifestyle   »   Gods Bathala had appointed to live with the mortals 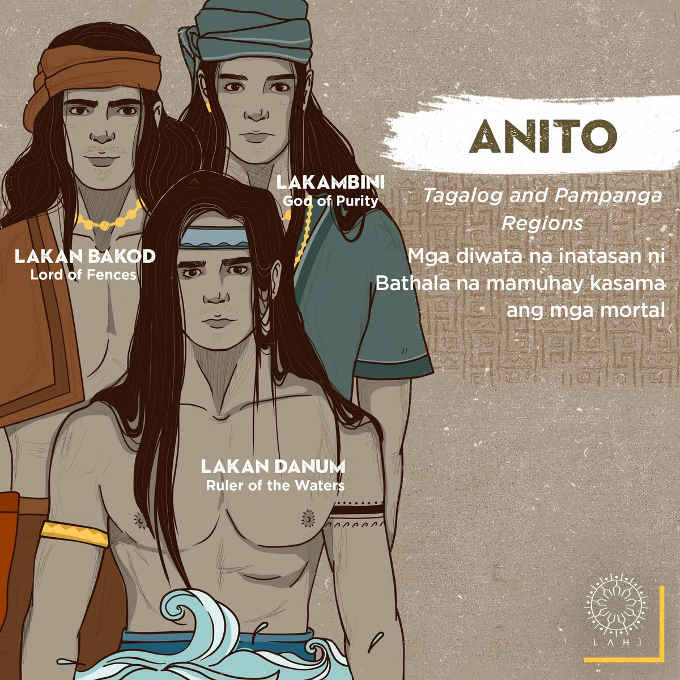 Gods Bathala had appointed to live with the mortals | Lahi

The following are gods appointed by Bathala to live with the mortals:(Tagalog and Kapampangan mythology)

Lakan Bakod (Lord of fences) The protector of the growing crops.God of Abundance. Lakan Bakod has known the anito of abundance, fences, and the fruits of the earth. In the Boxer Codex manuscript, he is described through a carved wooden statue of him as having gold eyes, teeth, and a long, gilded penis the length of rice stalks. He was said to have resided in the plants used to create the fences constructed to protect the crops and fields from animals. Whenever they invoked him to pray for a good harvest and an abundance of food, they held a banquet and revealed in the fields under a canopy that they construct. Here they put up an altar where they place the wooden statue of Lakan Bakod and those participating in the maganito form a ring, dance, eat, and have a feast. The katalonans would then place some of the food offerings, eels being his primary food offering, in the mouth of the statue along with libations of drinks.(pinoy-culture)

Lakambini (God of purity)was originally the Tagalog god/diwata of kapurihan (purity) venerated in the ancient Kingdom of Lusung. Also known as Lakan Bini, Lakan Bingi (Bini/Bingi which means pure) but was later known as the Tagalog god of the throat, food,  and anti-gluttony. Lakanbini is known as the pure maiden because of his incomparable beauty, ironic that he is a male diwata. Worshiped mainly by men of ancient Tondo or Lusung because of his beauty, and is the patron god of bachelor’s prayed upon to find their future spouse. An obscure deity often called by the Spaniards as “abogado de la garganta” (the throat advocate).(lightnostraad)

Lakan Danum (Ruler of the waters) The ancient Kapampangans believed that the seas were ruled by a group of serpentine gods, called the Lakandanum. In the Kapampangan language, the word Lakan means “lord” and Danum means “water”.