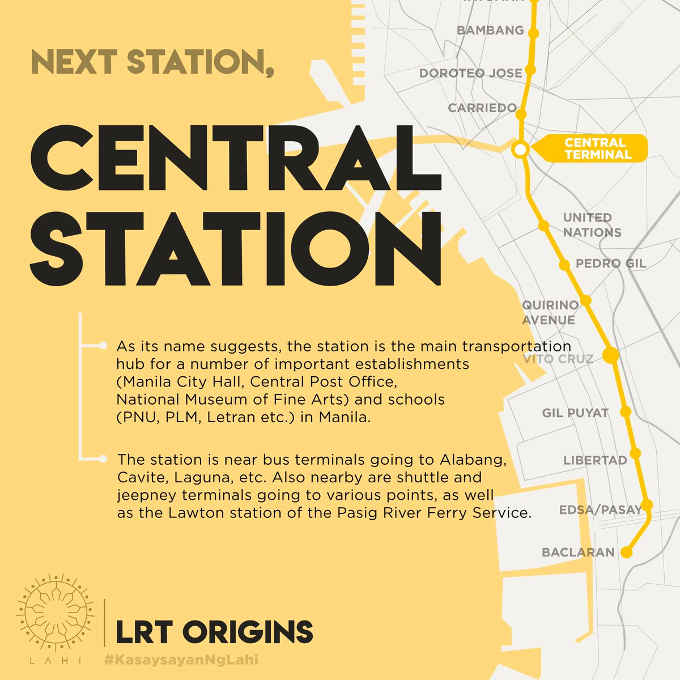 The LRT Central Station, as its name suggests, is the main transportation hub for a number of important establishmentsn such as the Manila City Hall, Central Post Office, National Museum of Fine Arts; Schools such as PNU, PLM, Letran in Manila.

The LRT Central Station is located south of the Carriedo LRT station and North of the LRT United Nations station.

The LRT-1 currently has 20 stations spanning from Roosevelt Station in Quezon City to Baclaran Station in Parañaque City.

The start of construction of the project extending the Light Rail Transit Line 1 (LRT-1) to Cavite will commence next month (May).

The Department of Transportation (DOTr) said it would have a ceremony on May 6 to signal the start of actual works of LRT-1 Cavite Extension Project.

The Department of Transportation on February said the project, which will stretch LRT-1 over 33 kilometers from Roosevelt in Quezon City to Niog, Bacoor in Cavite City,  would start this month (April).

Once the extension is built and completed, travel time from Bacoor to Central Station in Manila will be down to 45 minutes, and to Roosevelt Station in one hour and 10 minutes,  even during rush hours.(philstar)