Philippine Motorists Must be Aware of the following Laws

One of the salient provisions of this law is that Infants and/or children with ages six  (6) years and below shall be prohibited to sit in the front seat of any running motor vehicle.

Under RA No. 4136, Philippine motorists must be aware of the maximum allowable speeds in Philippine streets, roads, and highways. 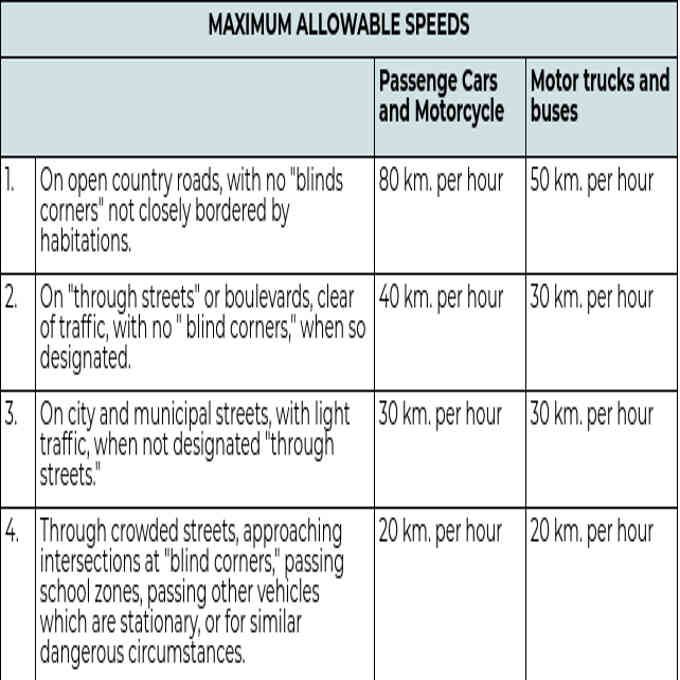 Under the Anti-Distracted Driving Act of 2016, be aware that it is unlawful for a drive to use a mobile communications device to write, send, or read a text-based communication or to make or receive calls, and other similar acts; and to an electronic entertainment or computing device to play games, watch movies, surf the internet, compose messages, read e-books, perform calculations, and other similar acts in a motor vehicle in motion or temporarily stopped at a red light, whether diplomatic, public or private vehicle.

Any person who shall violate any provision of this Act shall be penalized with:(a) A fine of five thousand pesos (₱5,000.00) for the first offense;

(c) A fine of fifteen thousand pesos (₱15,000.00) and suspension of driver’s license for three (3) months for the third offense; and

(d) A fine of twenty thousand pesos (₱20,000.00) and revocation of driver’s license; Provided, That the implementing agency may increase the amount of fine herein imposed once every five (5) years in the amount not exceeding ten percent (10%) of the existing rates sought to be increased which shall take effect only upon publication in at least two (2) newspapers of general circulation: Provided, Further, That a driver of a public utility vehicle, a school bus, a school service vehicle, a common carrier hauling volatile, flammable or toxic material, or a driver who commits an act classified herein as distracted driving within a fifty (50)-meter radius from the school premises shall be subject to a penalty of thirty thousand pesos (₱30,000.00) and suspension of one’s driver’s license for three (3) months.

The Anti-Drunk and Drugged Driving Act of 2013 or RA No.10586 is an act penalizing persons driving
a motor vehicle under the influence of alcohol, dangerous drugs, and similar substances.

A driver found to have been driving a motor vehicle while under the influence of alcohol, dangerous drugs and/or other similar substances, as provided for under Section 5 of this Act, shall be penalized as follows: