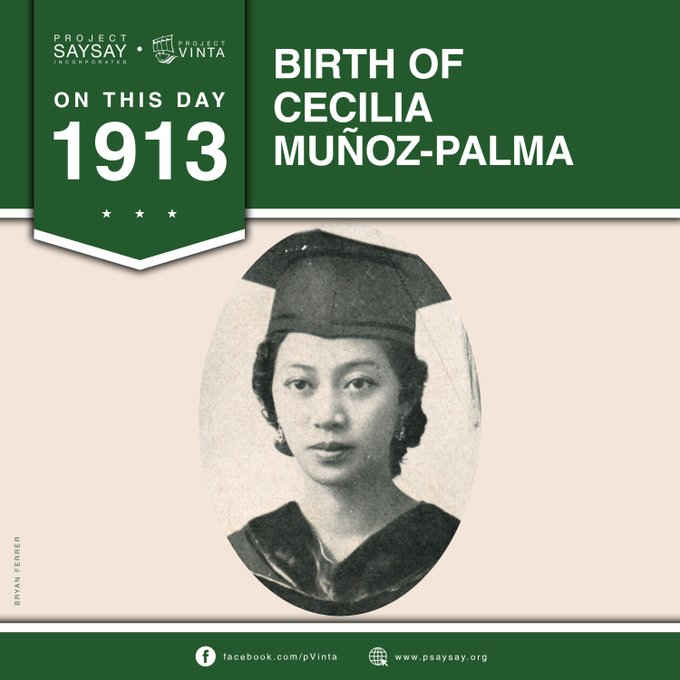 Who is the first female associate justice of the Philippines Supreme Court?

On November 22, 1913, jurist and politician Cecilia Muñoz-Palma was born in Bauan, Batangas. After earning her law degree at the University of the Philippines and topping the bar examinations in 1937, she proceeded to study at Yale University where she earned her Master of Laws.

She steadily built her career in the legal profession after the war, starting as Quezon City prosecutor in 1947, the first woman to hold the position.

Afterward, she was appointed as a trial court judge in Negros Oriental, Laguna, and Rizal until her appointment to the Court of Appeals in 1968.

She made history in 1973 after she was appointed as the first female associate justice of the Supreme Court. Serving until 1978, she became famous for being one of the few dissenters to the Marcos dictatorship from the high court.

Among her notable dissenting opinions were on the extension of Martial Law, the proposed amendments of President Ferdinand Marcos to the constitution, and the constitutionality of presidential decrees issued by the president.

She also insisted on the jurisdiction of civilian courts instead of military tribunals in hearing cases of many political prisoners at that time.

She continued to express her opposition to the dictatorship when she won a seat in the Batasang Pambansa in 1984 under the United Nationalist Democratic Organization (UNIDO).

After the EDSA People Power Revolution, President Corazon Aquino appointed her to the Constitutional Commission which later elected her as its chairperson.

She kept herself from public view after the ratification of the new Philippine Constitution in 1987 only to return in 1998 when President Joseph Estrada appointed her as chairperson of the Philippine Charity Sweepstakes Office, a position she held until 2000.