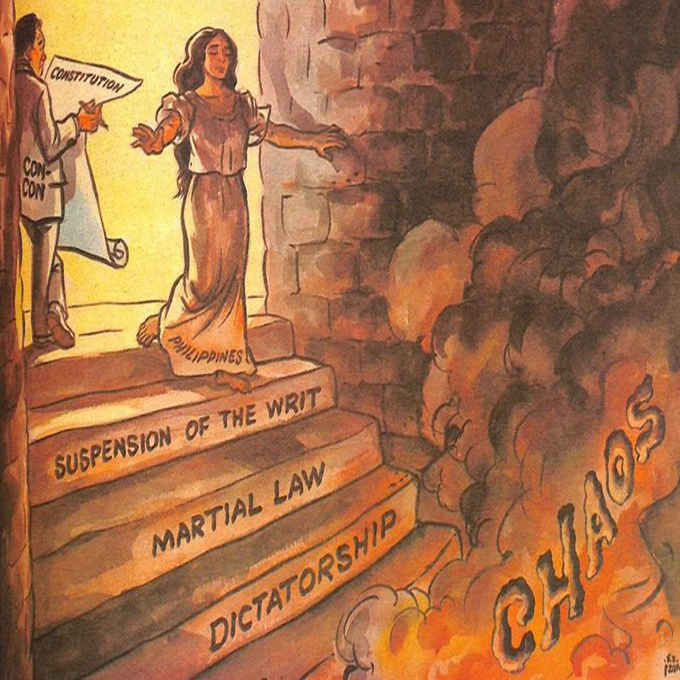 The Road to Martial Law (A Blog Series/THREAD)

A series about the yrs and months leading to the declaration of Martial Law on 23 September 1972, a blow-by-blow account of what happened based on primary sources laid out in an easily readable singular narrative

Part 1: It Takes a Village to Raise a Dictator: The Philippines before Martial Law

On the night of 20 Sept. 1935, after his victory party, Julio Nalundasan was mysteriously shot dead in the head at his home by an unknown sharpshooter. The immediate suspect was Ferdinand Marcos.

The U.S. Army noted that Marcos’ claims of valor during #WWII were “fraudulent” and “malicious.”

Part 4: The Turbulent 60s and Marcos’ Ascent to Power

The most prominent defection in the 1965 Election was that of Marcos who left the Liberal Party to join the opposing Nacionalista Party. He won as President.

Part 5: The Gathering Storm—Beginnings of the Communist insurgency and Moro secessionism in the 60s

Part 6: The First Quarter Storm of 1970 – The Philippines on the Brink

Journalist Pete Lacaba: “A powerful storm was sweeping the land, a storm whose inexorable advance no earthly force could stop, and the name of the storm was history.”

Part 7: A Plan for the Endgame – Plots, Protests, Scandals and Assassinations

Marcos wasted no time in reshuffling his Cabinet and promoting people in the military, ignoring merits, and ensuring loyalty.

Marcos took great risks, tactical, and carefully weighed decisions. It required knowing the rules, the loopholes in them, and how to use them to his advantage.

Part 9: Hijacking Democracy: The Mood Before the Declaration of Martial Law

Most of the media did not believe that Marcos had the audacity to implement Martial Law. Even opposition leaders didn’t. This element of surprise played out in Marcos’ favor.

The timing of the imposition of martial law was dependent upon Congress’ adjournment, originally slated to 21 Sept. But at the last min., congressional leaders decided to delay it to 23.

Part 11: Like a Thief in the Night – Martial Law Implemented

Ferdinand Marcos, ever the paranoid leader, never revealed his plans for Martial Law to his close associates, except to a selected few, many of whom were within his inner circle of advisers.

After a long news blackout, at 7:15 p.m., Ferdinand Marcos, with a solemn gaze at the camera, announced that he had put the entire country under Martial Law.

Part 13: A Mere Scrap of Paper – The Constitutional Convention Hijacked

The new draft Constitution accorded Marcos decree-making powers, wielding Executive & Legislative authority, too much for a single leader of a country that claimed to be democratic.

Chief Justice Roberto Concepcion wrote: “Indeed, I cannot, in good conscience, declare that the proposed Constitution has been approved or adopted by the people.”

Part 15: Road to Martial Law Redux: A Conclusion to the Series

To whom much is given, much is required. Now that you know the story, responsibility is in your hands.