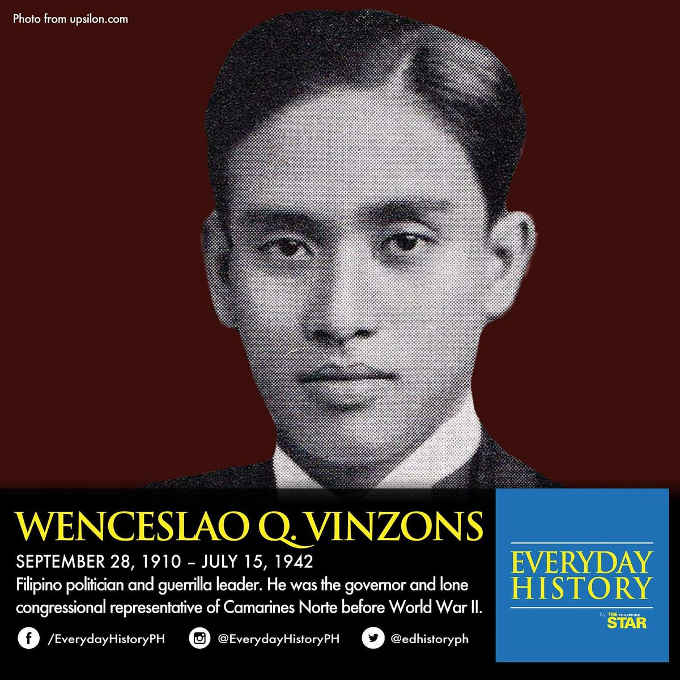 On this day, July 15, in 1942, Filipino politician and guerrilla leader Wenceslao Q. Vinzons died at the age of 31 after being bayoneted by Japanese forces in Daet, Camarines Norte for refusing to pledge allegiance to Japan.

As one of the first Filipinos to organize a guerrilla movement against the Japanese, Vinzons became a target of execution. His 2,800-strong guerrilla force has been a thorn on the side of the Japanese in Camarines Norte.

Prior to the war, Vinzons was the province’s governor and lone representative in the Philippine Legislature. He was born on Sept. 28, 1910, in Indan, Camarines Norte.

Indan is now named Vinzons in his honor.

On this day, in 1985, the World Conference on Women opened in Nairobi, Kenya, with Filipino diplomat (and future Senator) Leticia Ramos Shahani as its Secretary-General.

The Conference was noted for the adoption, by consensus, of the Forward-Looking Strategies for the Advancement of Women, which provide a long-term blueprint for action to advance the status of women in economic, social, cultural, and legal development.