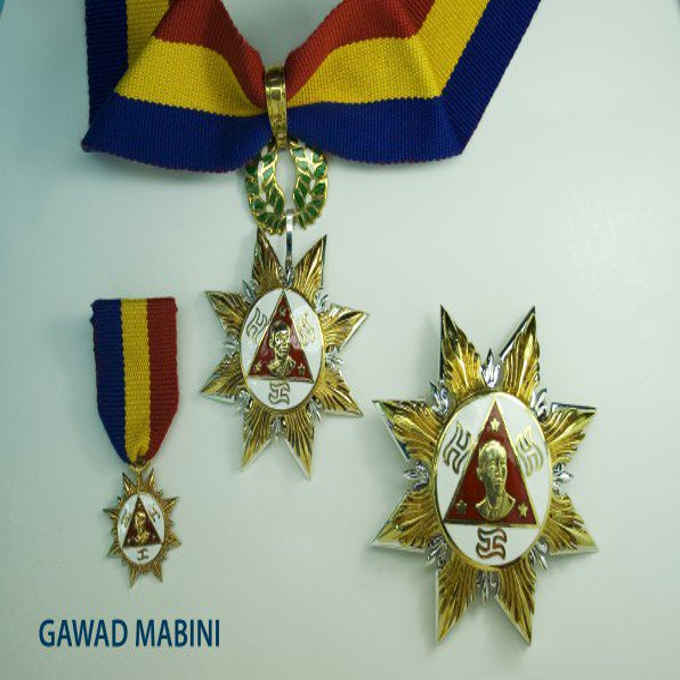 On this day, June 24, in 1974, the Order of Gawad Mabini was created by virtue of Presidential Decree No. 490. The Gawad Mabini is conferred on Filipinos who rendered distinguished foreign service or helped promote the interests and prestige of the Philippines.

The award was named after Apolinario Mabini, the Philippines’ First Secretary of Foreign Affairs.

Dakilang Kamanong (Grand Cross) – To be awarded to the incumbent or former Secretary of Foreign Affairs, Department of Foreign Affairs Officers with the rank of Chief of Mission, and Cabinet Members or other high officials who have headed a Philippine delegation to an important international conference on a ministerial level and have made substantive contributions in the interest of the government and public welfare as a result of their participation in such conference.

Dakilang Kasugo (Commander)– To be awarded to officers from Career Minster to Foreign Service Officer Class IV and to personnel of other government agencies serving as attaches in Foreign Service establishments who must have been recommended by the Chief of Mission or the Principal Officer of the post where they have served, as the case may be, or by the Secretary of Foreign Affairs, in the case of officers in the Home Office.

Kasugo – To be awarded to staff officers and employees of the Department of Foreign Affairs. Nominees must have been recommended by the Chief of Mission or the Principal Officer of the post where they have served, as the case may be, or by the Secretary of Foreign Affairs, in the case of personnel in the Home Office.

On June 18 of last year, 2018, four diplomats became recipients of the Gawad Mabini.

Dakilang Kamanong was awarded to Consul General to Dubai Paul Raymond Cortes; Dakilang Kasugo to Vice-Consul Luningning Camoying and Special Assistant Robespierre Bolivar; and the Kasugo to Eduardo Paraan, who served as former Acting Director of the Intelligence Service Unit.

Bolivar, the Gawad Mabini with the rank of Commander awardee, served as the previous DFA spokesperson before Assistant Secretary Elmer Cato took over the position. (PNA)

Approximately a year after he sent Martin de Goiti to make peace with its former rulers and a fortnight after their victory in the battle at the lagoon Bangkusay due north, Miguel Lopez de Legazpi formally decreed the settlement of Manila at the mouth of the Pasig River as a City and ordered the creation of a cabildo (municipal corporation) consisting of two alcaldes (mayors), twelve Regidores (councilors), an Alguacil Mayor (Sheriff), and a notary to administer the same.

Philip II of Spain granted the City its own Coat of Arms by 1596. which bore a striking similarity with then-Coat of Arms of Spain except that the Lion had “a dolphin tail” (a heraldicsea-lion, or morse) in a blue field to signify that the Philippines was an overseas (de ultramar) dominion. Said arms were incorporated in the coat of arms of the Philippines used during the American Colonial Period, while a modified version remains in use by the City Government of Manila until the present. (National Historical Commission of the Philippines)