Philippine Endangered Species Day is celebrated today as a day to remind us about the importance of protecting endangered species.

May 18 is celebrated around the world as Endangered Species Day.

Animal Conservationists pointed out that animals are not medicine, jewelry nor clothes. 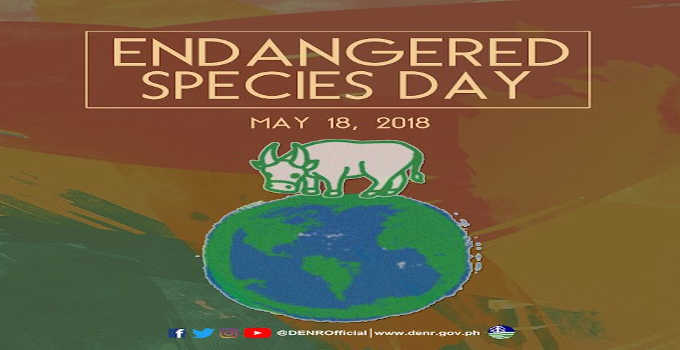 Philippines Endangered Species day’s goal is to move as many species lower down the red list.

Red List is widely recognized as the most comprehensive, objective global approach for evaluating the conservation status of plant and animal species.

The goal of The IUCN Red List is To provide information and analyses on the status, trends, and threats to species in order to inform and catalyst action for biodiversity conservation.

Various groups such as the WWF-Philippines (World Wide Fund for Nature) have been working so hard to save as many endangered animals in the Philippines as it can, in particular, the Philippine Tamaraws in Mindoro, Irrawaddy Dolphins
in Malampaya Sound and the whale sharks in Donsol.

Individual Filipinos can help save not only the endangered species, climate, and endangered plants in the Philippines by doing simple things such as saving water, saving energy, reusing and recycling things, reducing waste and pollution.

Wildlife in the Philippines sees a better tomorrow.

Countries around the world are involved in the effort to save endangered species.

The UK, for instance, will introduce one of the world’s toughest bans in ivory sales.

In South Africa, measures are being undertaken to highlight the importance of protecting endangered wildlife, particularly, lions, rhinos, elephants, and pangolins which are some of the victims of international wildlife trade.

This illegal trade threatens the survival of endangered and vulnerable species.

If we are serious not only about protecting endangered species but protecting our planet in general, we can start by doing these simple things immediately