Did you know that the Sierra Madre mountains shields us from strong storms? Like waves
breaking on a beach, storms crash against the back of the Sierra Madre, weakening as
they go along. We should work together to protect her forests, the same way she
protects us. 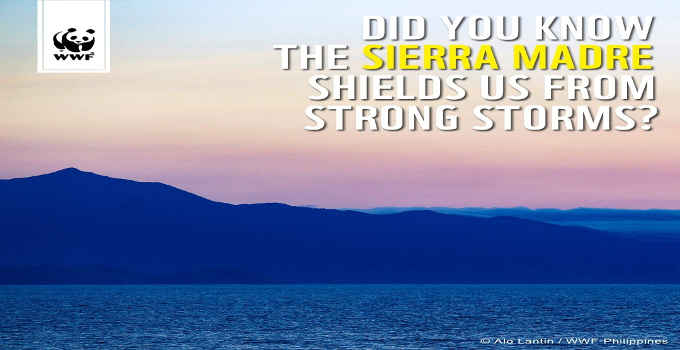 The Sierra Madre mountains is the longest mountain range in the Philippines. Running
in the north-south direction from the provinces of Cagayan to the north and Quezon to
the south, the mountains form the eastern backbone of Luzon Island, the largest island
of the archipelago. It is bordered by the Pacific Ocean to the east.

The Pacific coast of Luzon along the Sierra Madre is less developed as the lofty and
continuous mountains forms a bold and an almost inaccessible shore, exposed to the full
force of the northeast monsoon and the waves of the Pacific Ocean.[1] Some of
communities east of the mountain range and along the coast are so remote they are only
accessible by plane or boat.

The country’s largest protected area, the Northern Sierra Madre Natural Park, is
situated at the northern part of the range in the province of Isabela. The park is
in the UNESCO tentative list for World Heritage List inscription. Environmentalists,
scholars, and scientists have been urging the government to include the other parks
within the Sierra Madre mountains for a UNESCO site that would encompass the entire
Sierra Madre mountain range from Cagayan to Quezon province.