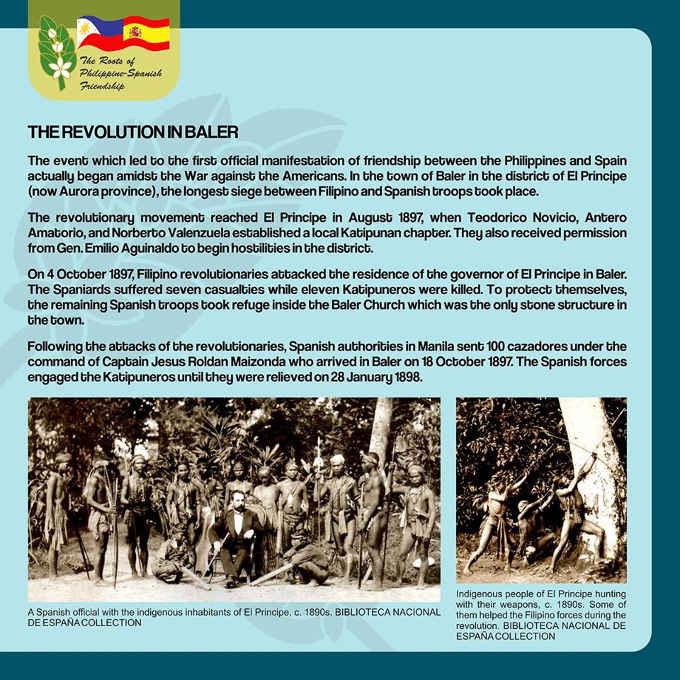 The Revolution in Baler | @NHCPOfficial

The Revolution in Baler

The events which led to the first official manifestation of friendship between the Philippines and Spain actually began amidst the war against the Americans. In the town of Baler in the district of El Principe (now Aurora Province), the longest siege between the Filipino and Spanish troops took place.

On 4 October 1897, Filipino revolutionaries attacked the residence of the governor of El Principe in Baler. The Spaniards suffered seven casualties while eleven Katipuneros were killed. To protect themselves, the remaining Spanish troops took refuge inside the Baler Church which was the only stone structure in the town.

Following the attacks of the revolutionaries, Spanish authorities in Manila sent 100 Cazadores under the command of Captain Jesus Roldan Maizonda who arrived in Baler on 18 October 1897. The Spanish forces engaged the Katipuneros until they were relieved in January 1898.

The Siege of Baler

The treaty of Biak-na-Bato in December 1897 resulted in the reduction of the Spanish garrison in Baler from 400 to only more than 50 men. The new contingent under the command of Captain Enrique de las Morenas arrived in February 1898. Expecting an attack by Filipinos with the resumption of the Philippine revolution, Captain de las Morenas ordered his men to station themselves inside the Baler church on 27 June 1898. In the following months, the Spaniards were isolated from the rest of the world while being surrounded by Filipino revolutionary forces.

On 1 July 1898, the Filipino forces left a letter at the doorstep of the church demanding the surrender of the garrison. It said that Spanish forces in other parts of the country have already surrendered. Aware that he may be in a long siege, Captain de las Morenas ordered his officers to dig up a well, construct an oven to bake bread, and plant vegetables to be cultivated, to supply the garrison for the long haul.

On the following 19 July, the leader of the Filipino revolutionary forces in the area, Col. Calixto Villacorta, demanded the surrender of the garrison saying that Manila was surrounded by 20,000 Filipino troops. After being rebuffed several times, Villacorta ordered a cannon to be fired at the church. However, the thick walls of the church prevented any serious damage.

Hardships inside the church

Meanwhile, the supplies of the Spanish troops started to run out, scurvy, and dysentery became common in the garrison. The absence of salt caused severe discomfort among the defenders of the garrison. They resorted to eating dogs, cats, lizards, rats, snakes, and the three carabaos that accidentally wandered into the churchyard. The new garrison commander, 2nd lt. Saturnino martin Cerezo, supplemented his men’s diet with squash leaves.

The Filipino forces outside the church attempted to demoralize the Spanish defenders by throwing stones at the church, and by making the local women convince the Spaniards to surrender. Lt. Cerezo ordered his men to staw away from the windows and to play games instead to pass time.

The Final Days of The Siege

In January 1899, Spanish authorities in Manila sent Captain Miguel Olmedo to Baler to inform the Spanish defenders that the war between Spain and the United States had already ended and it was time to surrender. Lt. Cerezo suspected that Olmedo was an impostor and sent him away. The Americans who had taken over Manila sent the gunboat USS Yorktown upon the request of Manila Archbishop Bernardino Nozaleda. O.P to rescue the garrison, but its crew was captured by Filipino forces.

In April 1899, the food supply inside the Baler church reached a critical point. There were only a few bags of coffee and some rusty cans of sardines. Despite this, the Spaniards prevented an attempt by the Filipino forces to burn down the church.

By the end of May 1899, Lt. Col. Cristobal Aguilar Castaneda arrived in Baler. Cerezo believed him to be another impostor. Aguilar left a few copies of El Impartial which had news about the war. At first, Cerezo believed the papers to be clever forgeries. However, he chanced upon the name of a friend he knew on the paper, persuading him of the paper’s authenticity.