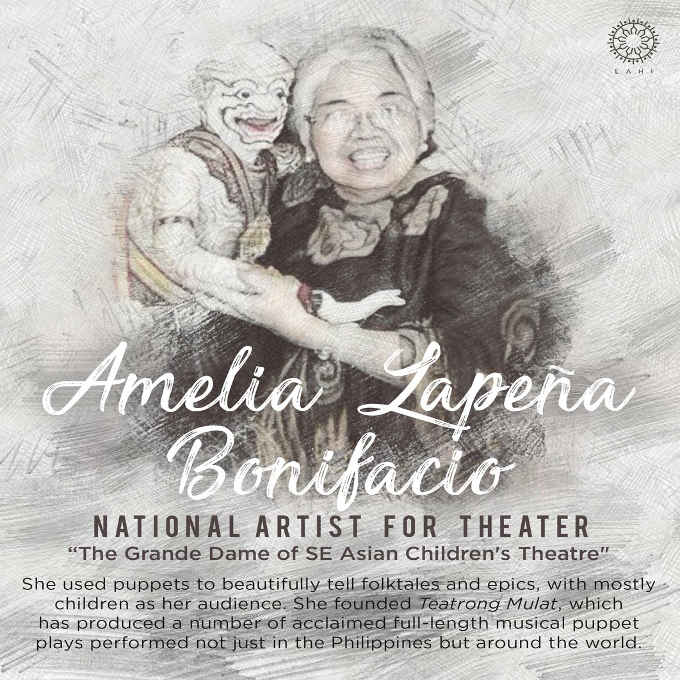 She used puppets to beautifully tell folktales and epics, with mostly children as her audience. She founded Teatrong Mulat, which has produced a number of acclaimed full-length musical puppet plays performed not just in the Philippines but around the  world.

Dubbed as “The Grande Dame of SE Asian Children’s Theatre,” Amelia Lapeña-Bonifacio  started receiving awards and editorships for her writing as early as high school and  college, but her set designing, which began in the UP, earned a Fulbright-Smith Mundt  Scholarship to the University of Wisconsin-Madison (MA/Speech-Theatre Arts).

Her first two plays, Sepang Loca (1957) and Rooms (1958), won awards and were premiered  at the UW Play Circle and subsequently published in the US.

Today her literary output consist of 20 books, 40 plays, 130 stories, several essays  which include the results of her researches on theatre as Research Fellow of several  local and international grants. Her research in the early 70s opened her eyes to the  puppet theatres of Asia, and in 1977, she founded and managed TEATRONG MULAT NG  PILIPINAS, an official UP children’s theatre and puppetry troupe which will celebrate  its 30th year in 2007.

MULAT has represented the Philippines in 28 international theatre festivals and in many  puppetry workshops and conferences. A widely translated author, ‘Tita Amel’ has written  and produced works for children such as Ang Paghuhukom and Sita & Rama: Papet Ramayana,  which have been shown all over the world.

Now a Professor Emeritus of the UP, she served as Professor of English and Chair of the  Creative Writing Program where she instituted courses in Creative Writing, later  formalizing them as undergraduate and graduate programs.

She also helped in the establishment of the Creative Writing Center which she headed as Director from 1986-1995. She worked for the recognition of more women writers and held  workshops on children’s literature, the last of which gave birth to two important  organizations: KUTING (writers for children’s books) and INK  (illustrators of children’s books).

She is president of UNIMA-Pilipinas (Union Internationale dela Marionnette) and the  ASSITEJ-Philippines (International Association of Theatre For Children and Young People).

Recipient of over 50 national and international literary prizes and awards, she is cited in a number of encyclopedia and British, American and Indian Bibliographies.

Now in her mid-70’s, she is still active in theatre, performing for children and adult  audiences, writing plays, designing and creating puppets, costumes and sets and setting the direction of children’s literature and children’s theatre in the country.panitikan.ph