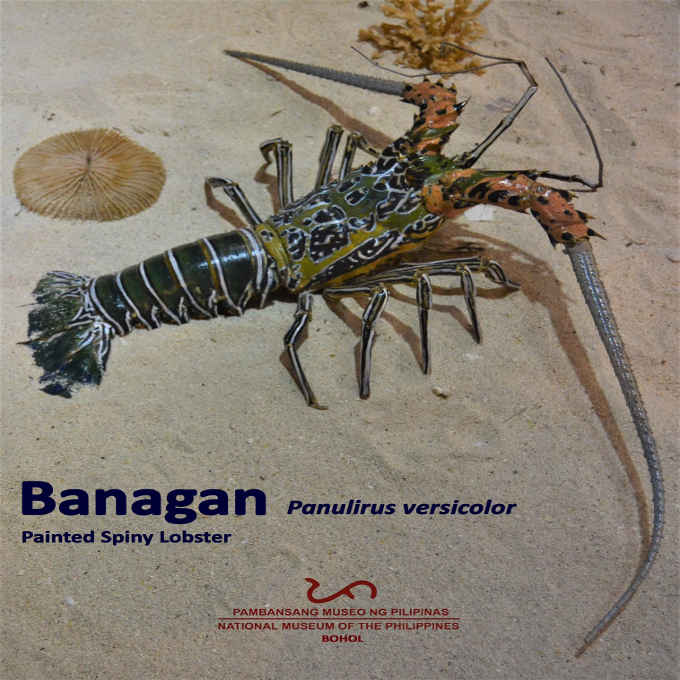 The Painted Spiny Lobster is one of the several species under the family of PalinuridaeLatrielle and a member of the crustacean class of aquatic arthropods which includes shrimps, prawns, and crabs.

It is also known as painted crayfish or marine crayfish.

The banagan is recognized by its longitudinal white lines and dark blue stripes on its legs. It is called Spiny Lobster due to the many spines on its carapace which has a ground color of dark blue arrayed with irregular white lines. Usually, a banagan measures up to 30 centimeters and weighs around 950 grams.

Lobster fishing is an important livelihood in coastal communities. Considered a delicacy and featured in menus in upscale restaurants and resorts, spiny lobsters are commercially viable. These crustaceans can be caught using the traditional bamboo fish and crab traps called Panggaw, with bottom-set gill-nets, or through spear-fishing.

The IUCN lists the status of the spiny lobster as the least concern however the rise in demand had caused indiscriminate harvesting of the species in recent years. To promote the sustainability of the species, the Bureau of Fisheries and Aquatic Resources (BFAR) issued the Fisheries Administrative Order (FAO) No. 265 series of 2020 which prohibits the catching, transport, possession, trade, and selling of gravid/pregnant and juvenile lobsters or banagan measuring less than the maturity carapace length at first sexual maturity.