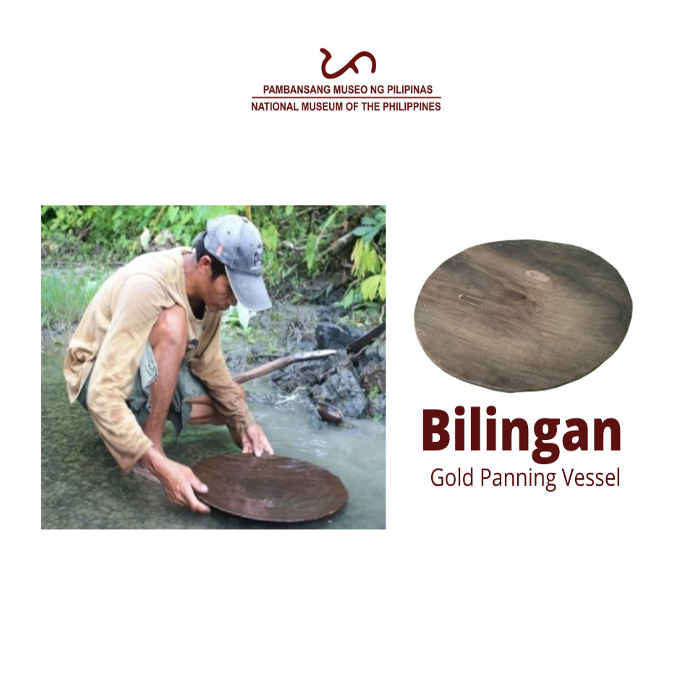 Gold mining and gold panning (“mamiling” in local language) played an important role in the lives of the early and present Butuanons and Manobos. This is an example of a gold panning vessel made of hardwood commonly known as “bilingan” by Butuanons.

“Bilingan” is used for gold panning or extracting gold from a placer deposit using a pan. The process is one of the simplest ways to extract gold and is popular with geology enthusiasts, mainly because of its low cost and relative simplicity.

The discovery of the Agusan Gold Image (dated 13th to early 14th century) and gold ornaments implied the existence of small-scale gold mining in the Agusan Valley, apart from the possibility of local blacksmith/goldsmith specialists in Butuan and its inclusion to already well-established trade networks with foreign traders, particularly with Java.

Historical documents also marveled at the abundance of gold in the already established 16th-century settlement in Butuan. Pigafetta’s 1521 account depicts Siagu, then king of Butuan, lavishly covered, according to custom, with silk from the waist to the knees, perfumed with storax and benzoin, and of course, great articles of gold ornaments including two large earrings and a dagger with a glided shaft.

Historical and cultural changes may have caused Butuan’s outstanding gold tradecraft to decline. However, gold still forms a significant part of Butuan’s present inhabitants, as observed in small-scale gold mining and gold panning in Agusan’s tributaries, especially during the rainy season.