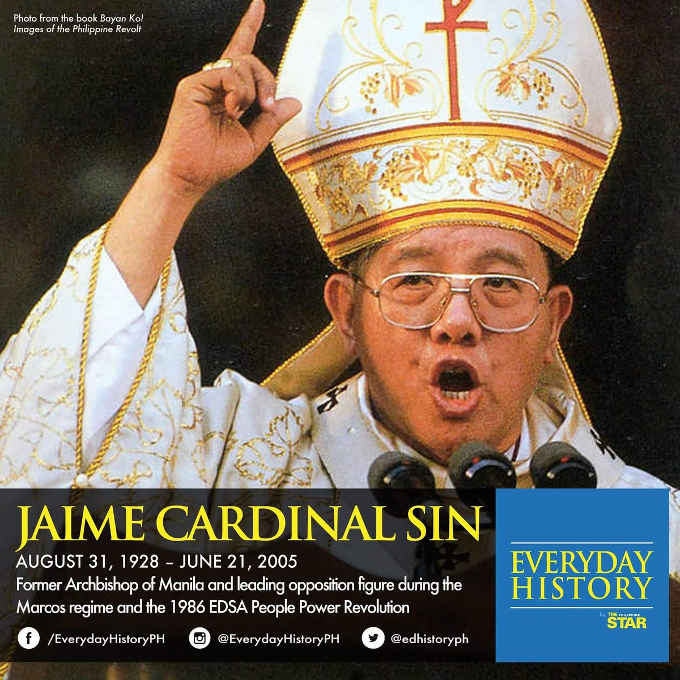 On this day, June 21, in 2005, former Manila Archbishop Jaime Cardinal Sin died of renal failure at the age of 76 at the Cardinal Santos Medical Center in San Juan City, Metro Manila.

He was a leading opposition figure during the Marcos regime and the 1986 EDSA People Power Revolution.

With his death, the Philippine government declared a period of national mourning and accorded him a state funeral at the Manila Cathedral, which was attended by an estimated 20,000 people.

He was buried in the crypt of the cathedral alongside his three predecessors. Sin was born on Aug. 31, 1928, in New Washington, Aklan.

On this day, June 21, in 2008, the Passenger ferry MV Princess of the Stars capsizes and sinks off San Fernando, Romblon in Sibuyan Island during a typhoon (typhoon Fengshen/Frank), 814 of its total number of passengers and crew are either dead or missing.

On this day, Aldam Tilao, popularly known as Abu Sabaya of the Abu Sayyaf group was killed by the Philippine soldiers. He is a former computer engineering student and former OWF in Saudi Arabia. (FoxNews)

On this day, Commonwealth Act No.338 was approved.CA No.338 is known as the Charter of The city of Tagaytay.

Luis Taruc became a member and organizer of a separate group that espoused Marxist ideology, the Partido Komunista ng Pilipinas (PKP). He eventually ran into conflict w/ the Quezon administration. He would be imprisoned thrice for his open campaign for farmers’/workers’ rights.

In 1941, upon the Japanese invasion of Philippines, Taruc would establish the Hukbong Bayan Laban sa Hapon (HUKBALAHAP). It would be one of the Filipino guerrilla networks that had always been a thorn on the side of the Japanese. It aided the Allied forces in Luzon in 1945.

After WWII, Taruc won a seat in Congress in 1946. He opposed the unequal laws favoring the U.S., namely the constitutional amendment that granted rights for Americans to utilize Philippine natural resources. His candidacy was eventually voided on the grounds of “terrorism.”

Taruc and the Huks eventually went underground, and it was under the Quirino administration, via his Defense Secretary Ramon Magsaysay, that the peace with Taruc was negotiated. Amnesty was issued this day in 1948.

However, Quirino failed to persuade Taruc and other rebels, as they conceded to register but never disarm. By August 1948 all negotiations collapsed. The establishment of the Economic Development Corps (EDCOR) and Land Settlement and Development Corporation (LASEDECO) helped ease the insurgency.

On 28 April 1949, while traveling to Baler, former First Lady Aurora Quezon, w/ her daughter Baby, and son-in-law Felipe Buencamino III, with a military convoy, was ambushed & killed by Huks. It earned public condemnation. Taruc claimed that it was “an accidental killing…”

After negotiations and carrot-and-stick policy of the Magsaysay administration, Taruc eventually surrendered in 1954 and agreed to be brought to trial. He would eventually be granted amnesty by Pres. Ferdinand Marcos on Marcos’ birthday in 1968.

In the Philippines, General Arthur McArthur, US military governor of the Philippines, issues an amnesty proclamation to those Filipinos who will renounce the insurgent movement and accept US sovereignty. (www.onthisday.com)