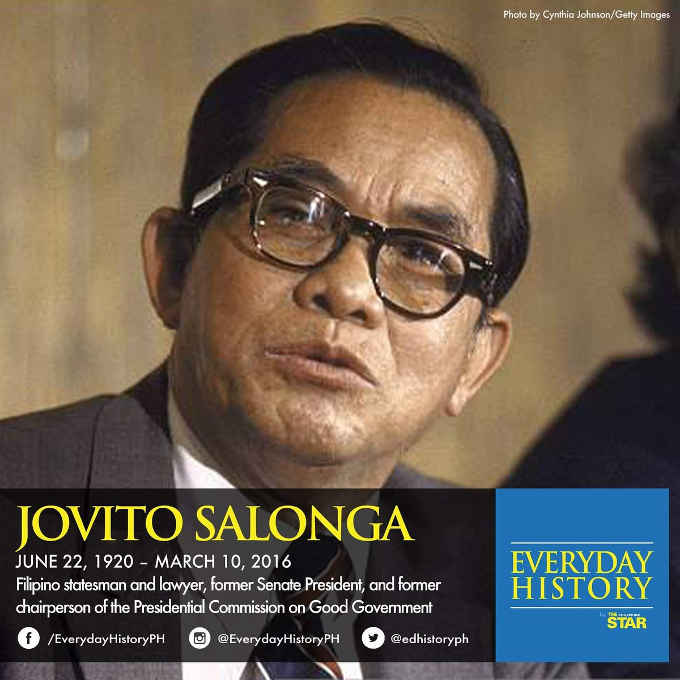 On this day, June 22, in 1920, Filipino statesman and lawyer Jovito Salonga was born in Pasig, Rizal Province. He is an outspoken critic of President Ferdinand Marcos and his declaration of Martial Law, earning him the moniker of “The Nation’s Fiscalizer.”

He was arrested for subversion in 1980 but was released. He went on exile in the US but returned after the 1986 EDSA Revolution. During the Corazon Aquino administration, he was appointed the chairperson of the Presidential Commission on Good Government (PCGG).

He later ran and won a seat in the Senate, and on his third term, he was elected Senate President. It was during his presidency that the Senate voted not to renew the Military Bases Agreement between the Philippines and the United States. He died on March 10, 2016.

He was the 14th President of the Senate of the Philippines.

On this day, June 22, in 2011, Gregorio “Comrade Roger” Rosal (KA Roger) (64), a popular Mao cap-wearing Filipino guerrilla (NPA), died of a heart attack. He had given a voice and face to one of Asia’s longest-running Marxist insurgencies as its spokesman.

Ka Roger is a native of Ibaan Town in Batangas.

He is a son of impoverished sugar plantation workers, Rosal became a trade union organizer and student activist before going underground in the mountainous Quezon province in the 1970s.

He was captured a year after the dictator Ferdinand Marcos imposed martial law in 1972 but escaped months later.

Rosal was among guerrilla leaders subjected to an unspecified punishment by the rebels for failing to take a strong stand against an internal purge of suspected military spies in the late 1980s.

Rosal served as rebel spokesperson from the 1980s to the 1990s, using laptop computers, two-way radios, and cellphones to bring guerrilla statements to households through radio and TV interviews. He often arranged visits for journalists to rebel encampments, regaling them by playing his harmonica. (Inquirer)