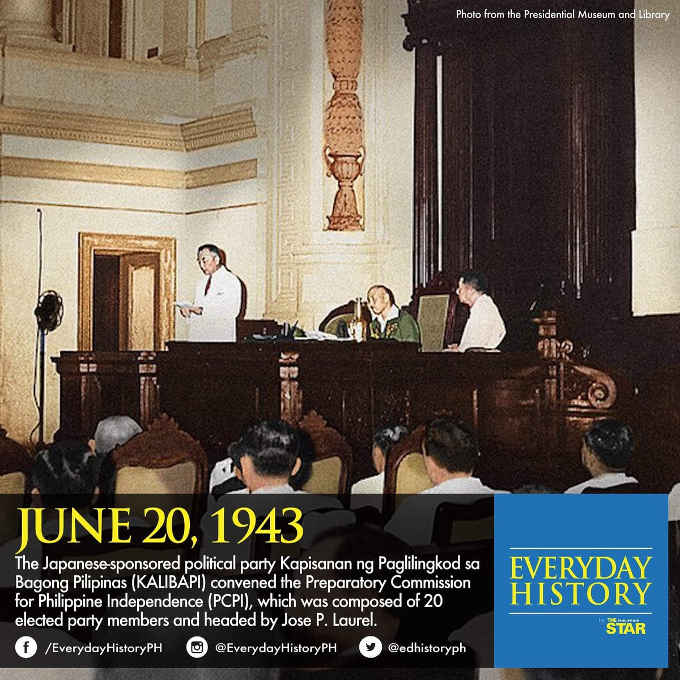 It immediately began the task of drafting a new constitution for the Philippines, which is accomplished in less than three months. The committee submitted a draft constitution on Sept. 4, 1943, which the KALIBAPI unanimously ratified on Sept. 7.

With the Japanese capture of Manila without resistance on New Year’s Day 1942, the Japanese occupiers immediately began instituting their rule. Certain members of the Quezon cabinet were asked personally by Pres. Manuel Quezon to stay behind to soften the blow of the occupation.

Gen. Masaharu Homma became the Japanese military commander in #PH who headed a Provisional Council of State, composed of the Philippine Commonwealth leaders that stayed behind. From here, the Philippine Executive Commission was formed, who acted as Cabinet for the Japanese commander.

On 8 December 1942, exactly a year after the Pearl Harbor attack & subsequent invasion of the Philippines by Japan, the Japanese instituted the formation of the Kapisanan sa Paglilingkod sa Bagong Pilipinas (KALIBAPI), a party designed to replace all political parties in the Philippines.

Recognizing that American influence was strong among Filipinos, to woo Filipinos to the Japanese side, Premier Hideki Tojo publicly declared several times in late 1942 to 1943 that #PH independence will be granted to Filipinos—something that the U.S. had not yet given.

This worried Pres. Manuel Quezon, who led the Philippine Commonwealth gov-in-exile in Washington, D.C., as Tojo’s verbal promise was already being acted upon, while the U.S. prioritized Europe over the Philippines in WWII.

The Constitution to be drafted was closely monitored by the Japanese. 3 months later, it would be submitted to the KALIBAPI convention and ratified, with the Japanese puppet government, the 2nd Philippine Republic inaugurated.

While being President of a Japanese-sponsored republic, Pres. Jose P. Laurel did his best to soften the blow of the occupation, even if it meant appearing to collude with the occupiers.

At the start of the Philippine liberation from Japanese control in 1944, Gen. Douglas MacArthur issued a proclamation nullifying all laws issued by the Philippine Executive Commission & 2nd Philippine Republic. This was seconded by the Supreme Court on 17 Sept 1945.

On this day, June 20, is the 72nd charter anniversary of Dagupan City, in the province of Pangasinan.

Eugenio Perez, who was then-Speaker of the House of Representatives, authored Republic Act 170 and signed into law by President Manuel Roxas on June 20, 1947, making Dagupan a chartered city.

On this day, June 20, in 1899, the Japanese vessel Nonubiki Maru left Nagasaki for the Philippines loaded with 10,000 rifles, 6,000,000 rounds of ammunition, and other war supplies purchased by Mariano Ponce.

Mariano Ponce with the aid of the Chinese revolutionary leader Dr. Sun Yat-sen, in his mission to Japan, obtained sufficient support from the Japanese military and a few Japanese politicians to enter into an agreement to purchase arms and ammunition in the Spring of 1899. At the same time, arrangements were made for “retired” Japanese officers to go to the Philippines as advisors to the Filipino army against the Americans. These officers actually served with the Filipino forces but the attempt to ship arms to the islands was a complete failure.

The Nunobiki Maru carrying the rifles and ammunition, and other military supplies were sunk in a typhoon, and a second attempt was stymied by the threat of the effective American blockade.

After the second shipment attempt failed, Ponce gave the arms to Sun who believed that if his revolution in China was to succeed, aiding the Philippines in return would be made easier. Sun would later be credited with the founding of the Republic of China and the collapse of dynastic China.

The Japanese contributed little to the Filipinos in their war against the Americans. The Japanese officers arrived at a time when regular warfare was proving impossible, and no substantial shipments of weapons ever arrived. The Japanese government, not willing to alienate the Americans, gave no formal support to Aguinaldo’s government or the nationalist cause. (kahimyang.com)