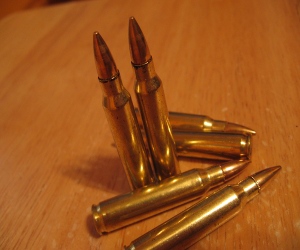 Laglag Bala is a modus operandi of a suspected criminal syndicate operating inside the Ninoy Aquino International Airport.

A Bullet or Cartridge is put by an unknown person into a passengers bag or luggage.

Once caught by the airport police or airport personnel, money is then allegedly demanded from the victim.

The Victim, fearing of being charged and imprisoned aside from the fact that they might miss their flight will offer to give money which is expected of them by the perpetrator employing the modus operandi. Some reports said that money is often times demanded from the victim.

The Rampant Laglag Bala incidents in Ninoy Aquino International Airport came to the attention of President Noynoy Aquino and ordered the immediate investigation of the case.

The latest victim of Laglag Bala is a 65 years old woman. The woman was astonished to learn of the bullet inside her bag. She claimed that the bullet was not discovered at the initial X-Ray of her bag but at the second X-Ray, the bullet was already there.

The 65 years old woman cried and denied ownership of the bullet. The Woman is about to board an airplane bound for Singapore accompanied by her daughter to watch her grandson play for the 2015 Singa Cup when she was stopped by the security personnel of NAIA.

The Government of President Aquino must look into this and deliver to jail all those involved in these Tanim Bala incidents.

Being caught possessing an unlicensed bullet or cartridge is a serious criminal offense under RA 8294 or the law penalizing illegal possession of firearms and ammunition.

Any person caught possessing an unlicensed bullet/cartridge or ammunition may be imprisoned for a period of 6 months and 1 day to 6 years if convicted.

The government must do everything in its power to bring this Tanim Bala gang or syndicate to justice and restore the tarnished reputation of the entire NAIA airport personnel.