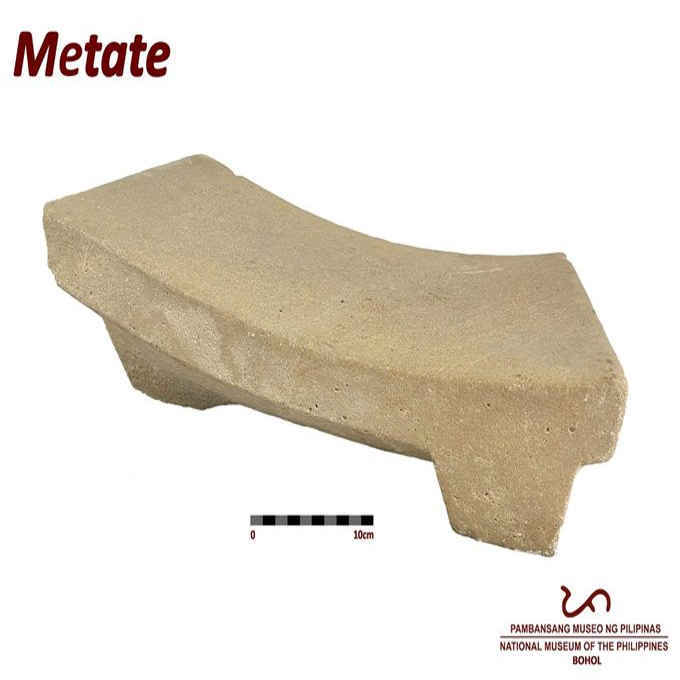 Ligsanan og Cacao is the local name for “Metate”, a cocoa grinder.

Ligsanan og Cacao (Metate) is a type of grindstone typically made out of hard volcanic rock such as basalt or andesite.
Generally, a metate is a large stone slab with a smooth upper surface paired with a roller pin, also made of stone.

In Mesoamerican culture, the metate comes in various forms. The metate from the ethnographic collection of the National Museum Bohol has slightly curving slab supported by three short legs inclined at an angle.

In Spain and in the Philippines, the metate is primarily used for the preparation of chocolate. The chocolate paste is prepared by placing roasted cocoa beans or nibs on the metate which is then crushed by the roller pin. A small amount of water is added to turn the ground cocoa into a paste. The roller may either be made of stone or wood, conch, or Melo shell.

The metate (ligsanan og cacao)was brought to the Philippines by the Spanish along with the introduction of the cocoa plant as a cash crop.

Today, cocoa is one of Philippine’s important agricultural produce. Drinking hot chocolate has also become a part of our local culinary heritage. In parts of the Visayas and Mindanao, the beans are grounded, pressed and formed into tablets called tablea or tableja. This unsweetened tablea is dissolved, beaten in hot water to form a frothy concoction called Sikwate.

In Bohol, sikwate is served during breakfast (pamahaw) or snacks (pamainit) paired with putomaya (sticky rice cooked in coconut milk with ginger), suman or bingka. For Bol-anons, a syrupy sikwate, fondly described as espeso meaning thick, is considered a special treat. At the heart of this mouthwatering local chocolate, tradition is an ingenious innovation developed thousands of years ago, on the other side of the world.